Japan has over 25 varieties of citrus. I know, it’s a lot. While many citrus varieties are popularly eaten raw, citrus is also a common flavoring in both savory and sweet foods in Japan. Two classic examples would be Ramune, a popular lemon-flavored fizzy drink, and ponzu, a Japanese citrus sauce. Citrus is especially popular in summer for its cooling sensation. Juicy and refreshing, it’s a great pick-me-up on those hot muggy Japanese summer days when everyone is battling natsubate (夏バテ, summer fatigue).

Today we want to introduce you to commonly known Japanese citrus, rarer citrus we’re featuring in our snacks, and some … interesting others. Let’s do this!

The Roots of It

Almost all citrus are descended from a few ancestral species, the most well-known of which are the Mandarin, Citron, Pomelo, and the Australian and Papuan Wild Limes. Cross-breeding, time, and geographic spread have contributed to the staggering diversity of citrus we see today. Citrus fruits are known to be rich in flavonoids and Vitamin C.They are also popular year-round with both Winter and Summer varieties.

Japan’s geography has a wide range of climates, from snowy Hokkaido to Tropical Okinawa, and certain regions have been particularly fruitful for citrus growth (pun, absolutely intended). The region known as Setonaikai in Japanese has the perfect climate for citrus. Setonaikai is the Seto Inland Sea, and the land surrounding it on the edges of Honshu, Kyushu, and Shikoku make up its coast. Now, on to the fruits! The Mikan is the most popular citrus in Japan and is a common remedy to natsubate. It’s a hybrid of a mandarin and a pomelo native to Japan, with a higher percentage of pomelo DNA (about 22%) than most hybrids. It is sweet, seedless, and peels easily. It’s also been called Cold Hardy Mandarin, Satsuma Mandarin, Satsuma Orange, and Tangerine (a broad term applied to many Mandarin/Pomelo hybrids) in English. It is native to Kagoshima Prefecture (formerly called Satsuma), the southernmost prefecture of Kyushu, but is mostly grown in Ehime and Wakayama, both in the region of Setonaikai. Its peel makes a wonderful addition to tea, brightening the flavor and adding a wonderful fragrance. Try it in our Handmade Mikan Candy or Pom Ponjuice Mikan Orange Mochi! This is the second most widely cultivated citrus fruit in Japan after the Mikan. It is a cross between a Dancy Tangerine and another Mandarin variety, with a thicker peel than a Mikan and a more tart, bitter flavor, but still more sweet than a grapefruit. The flesh has an impressive fragrance when peeled. Its great flavor is on display in this amazingly simple Candied Iyokan Peel. Today, 80% of Iyokan cultivation happens in Ehime prefecture. Yuzu has been making a name for itself on the global culinary scene, popping up in cocktails and many an adventurous baker’s Instagram. It’s a versatile fruit with good tang and sweetness, and is mainly used for its zest and juice, which are similar to a grapefruit in flavor, with hints of mandarin orange. It grows wild in Tibet and central China but is most widely cultivated in South Korea and Japan. We love it for its wonderful aroma and the intense flavor it imparts. Looking to try it out? You won't be disappointed with the wide variety of yuzu flavored snacks Japan has to offer! This very tart fruit is native to the Ryukyu island chain (which includes Okinawa) and Taiwan. It is green when young and turns yellow when ripe, and its unique tart flavor makes it an interesting alternative to lemon and lime for garnishing and flavoring. Its potent flavor partners with salt and soy sauce in this addictive Okinawa-exclusive senbei. Hyuganatsu is a sweet, juicy citrus variety often eaten raw the way a grapefruit would, cut in half and maybe with sugar sprinkled on top. It is light yellow in color and about the size of an orange. Like the mikan, it is a refreshing way to stave off natsubate, which is why we added Hyuganatsu Jelly to the “Citrus Refresh” Classic Bokksu. There are theories that the variety stems (haha, more plant puns) from a mutated Yuzu, or a chance cross of a Yuzu and Pomelo. 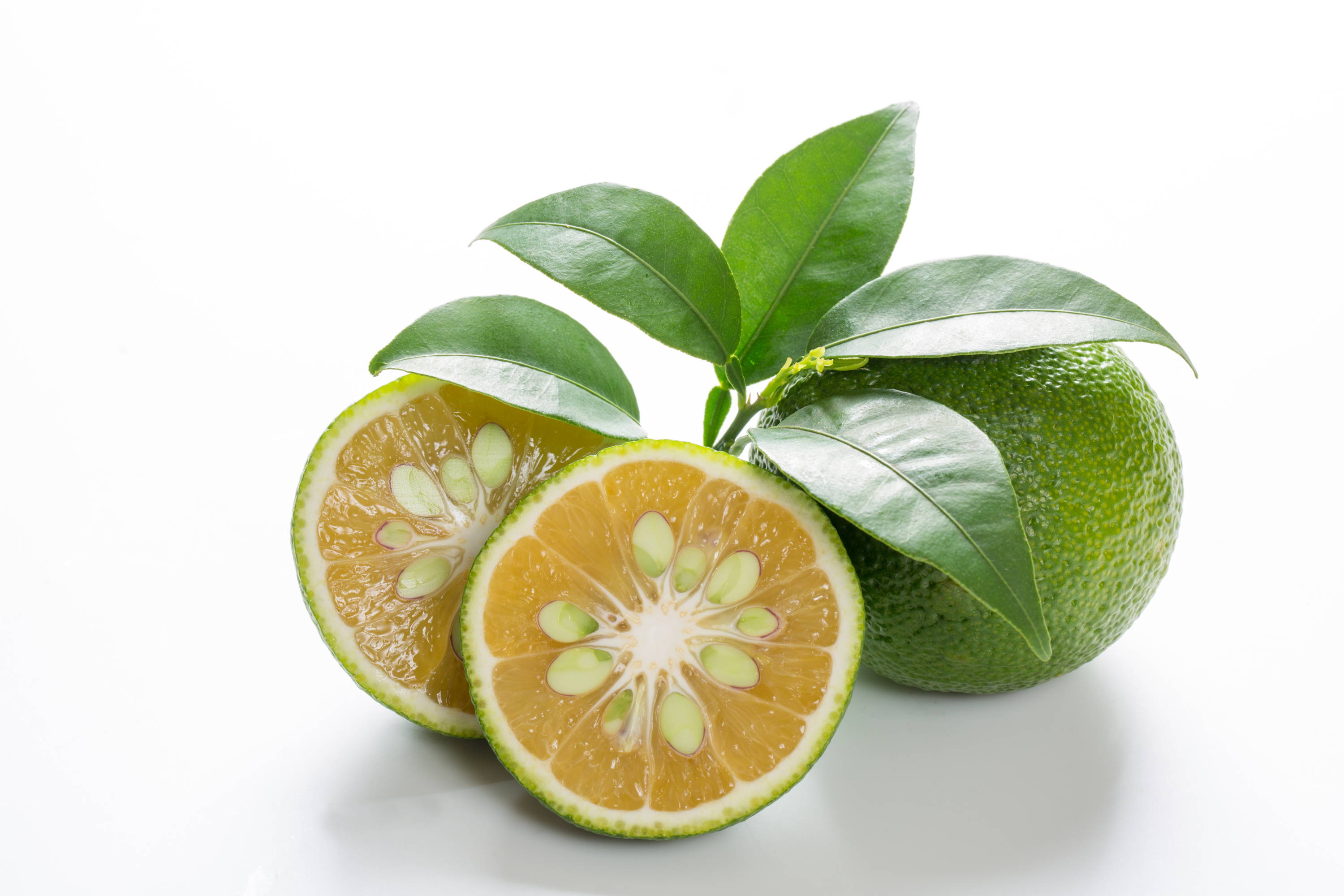 The sudachi fruit is a small green citrus native to Japan that is frequently used as a flavoring in place of lemon or lime, as it's too sour to eat. It’s most famously used in ponzu sauce, so you may have tried this fruit without even knowing it! Sudachi is only grown in the Seto Inland Sea region, and 98% of cultivation happens in Tokushima. Though more sour than either, sudachi is a genetic cross between yuzu, and another citrus like the tachibana orange. Our favorite way to enjoy this sour stunner is in Seaweed Tempura: Setouchi Sudachi Flavor. This sharp citrus variety is closely related to the Yuzu but has the tart bite of a lemon. It’s often used in Japanese food as an alternative to vinegar on dishes like sashimi, cooked fish, and hot pot. It is mainly grown in Oita Prefecture, where certain regions are home to 200 and 300-year-old trees! Outside of Oita it can be a little pricey and is regarded as a delicacy. Its sourness makes it a great flavoring for buttery treats like this Oita Kabosu Sable. This is probably the weirdest citrus fruit you will ever see! Its name in Japanese (and Chinese, Korean, and Vietnamese) translates literally to “Buddha’s Hand” because of its fingerlike tendrils of citrus that look like an open hand when ripe. It’s mostly prized for its fragrance, and the unripe “closed hand” is given as an offering in Buddhist temples as a symbol of prayer. It has very little pulp and juice, so it isn’t popular for eating, but the zest can be used to add flavor to many dishes or candied as a sweet snack.

These are just a handful of Japan’s citrus fruits, let alone all the other fruits they’ve become known for (square watermelon anyone?). Unfortunately, many of these fruits aren’t available in the US (yet, fingers crossed), so you’ll have to find another way to battle your natsubate. We recommend long naps, kakigori (shaved ice), and our “Citrus Summer” Bokksu (obviously)!