In Japan, there are festivals held throughout the year celebrating seasons, traditions, and historical events. One of the most important elements of these festivals is food. After all, what brings a community together better than food? Here are some of the delicious dishes you’ll see at a Japanese festival! 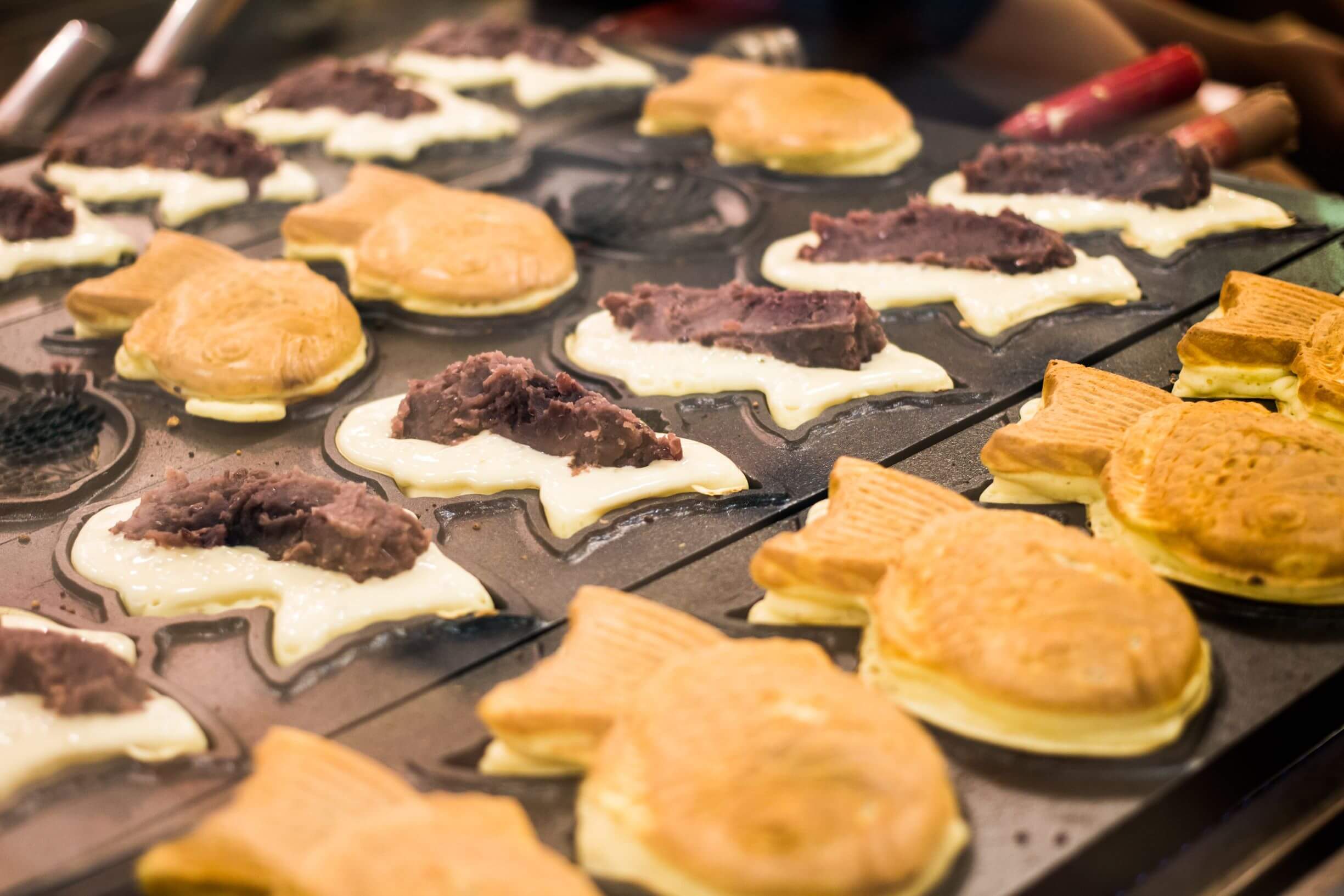 Taiyaki is an iconic Japanese street food. They are fish-shaped cakes filled with red bean paste, but sometimes feature other fillings like sweet potato, custard, or chocolate. Taiyaki is cooked in a unique pan similar to a waffle maker, but with a detailed fish-shaped mold that gives them their distinct appearance. 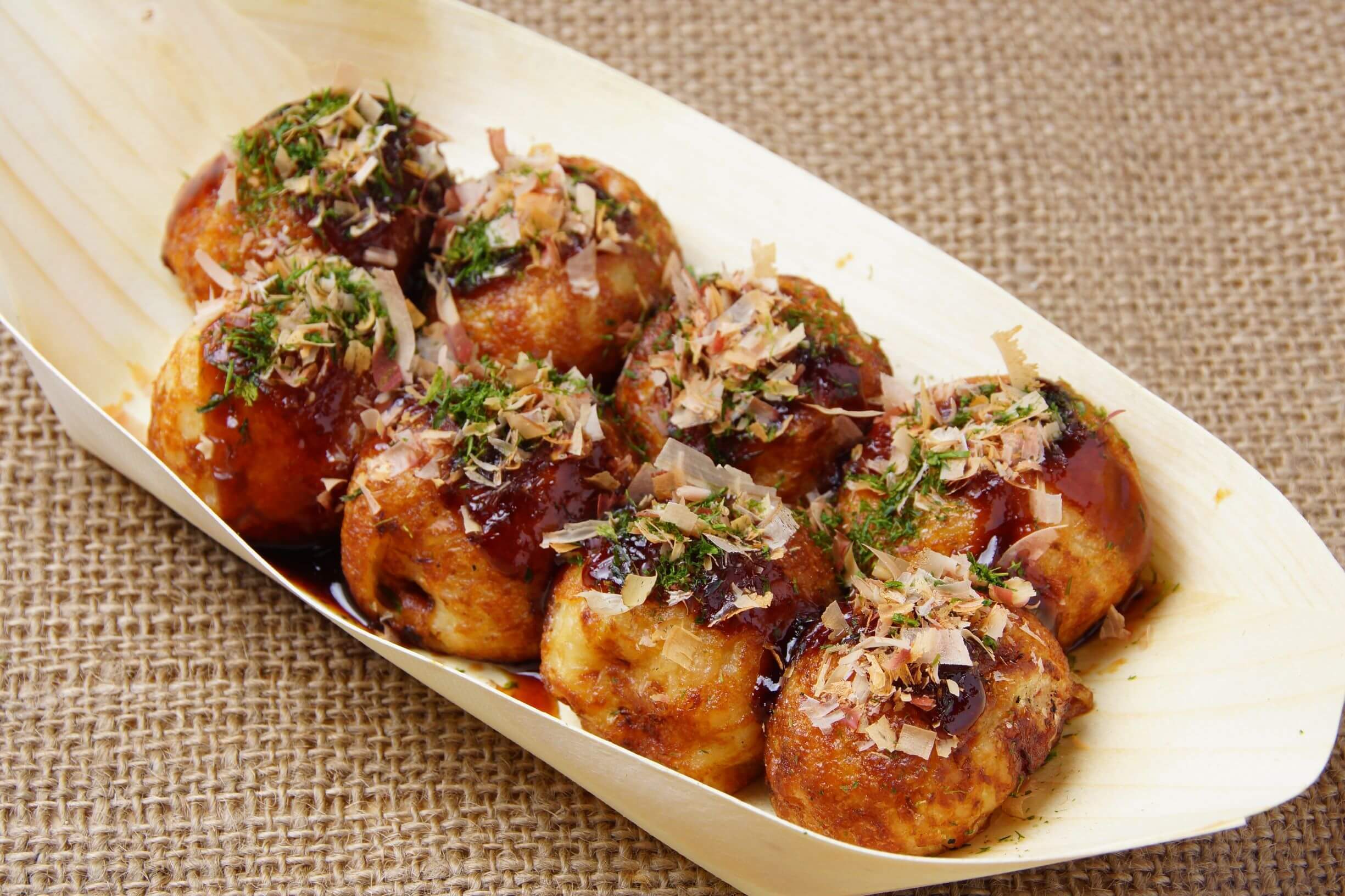 Often called “octopus balls” in the United States, Takoyaki is a popular ball-shaped Japanese street food from Osaka. Fried pancake batter is filled with diced octopus, tempura scraps, pickled ginger, and green onion. Takoyaki is cooked in specialty rounded pans and turned over with a pick to create their signature ball shape. 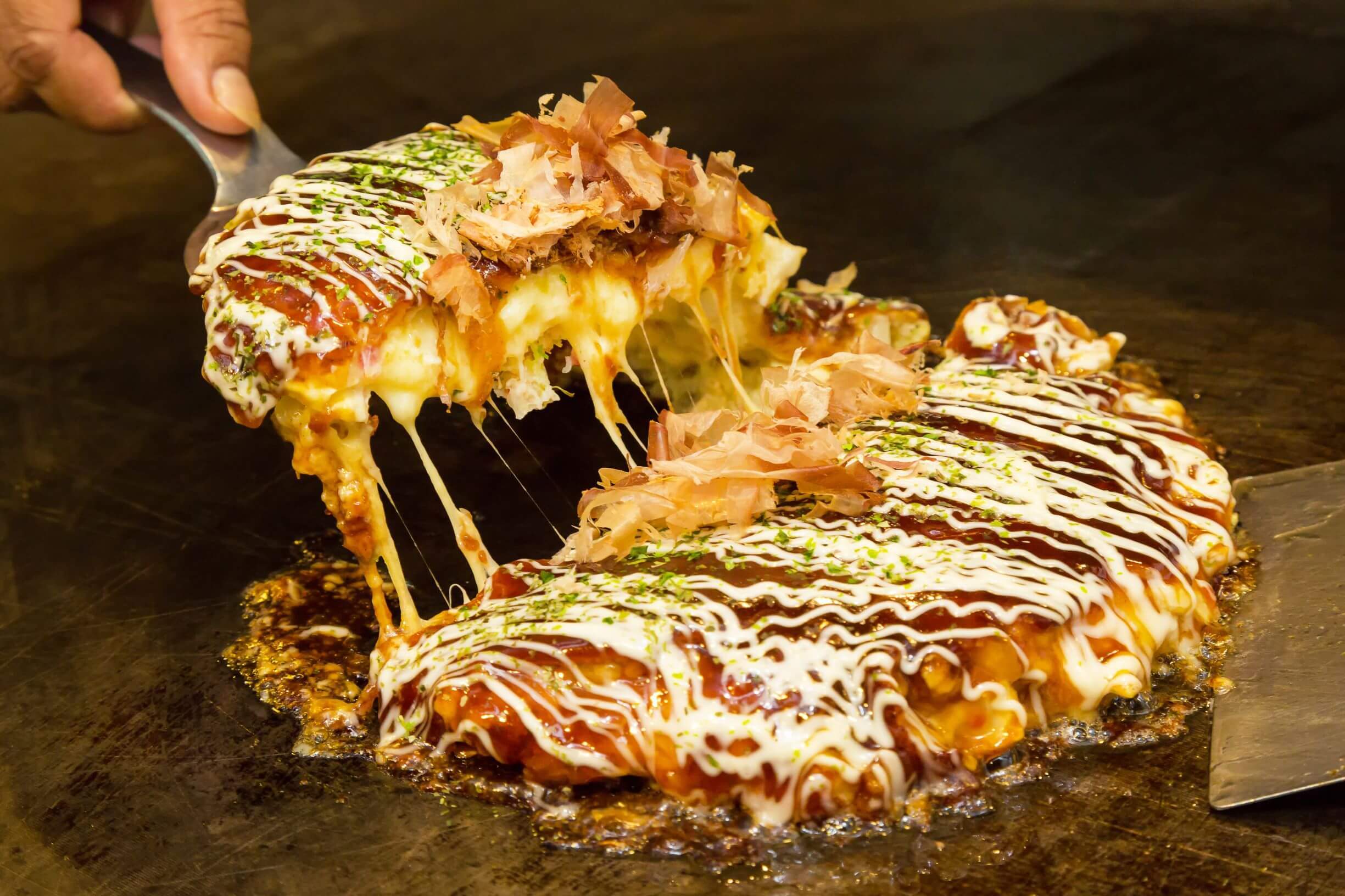 Okonomiyaki is a savory Japanese pancake served with a special sauce. Toppings can vary, but common ones include bonito (fish) flakes, shredded cabbage, green onion, and pork. Okonomiyaki proves that there are more ways to enjoy pancakes than with maple syrup. 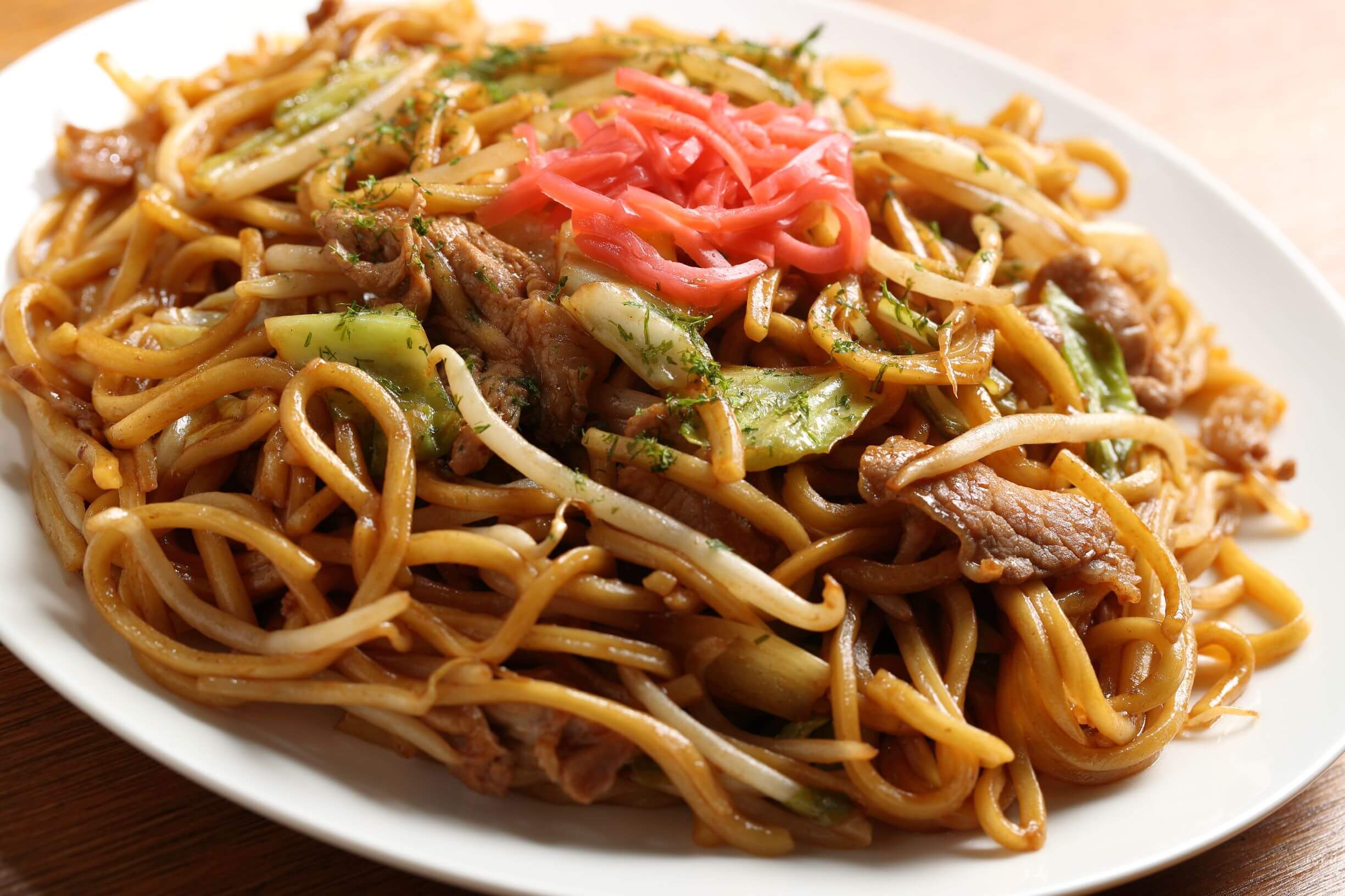 Yakisoba is a dish consisting of stir-fried wheat noodles and a variety of finely chopped vegetables and meat, typically pork. Noodles are a classic comforting and filling food, and yakisoba is no exception, remaining an extremely popular option at Japanese festivals. 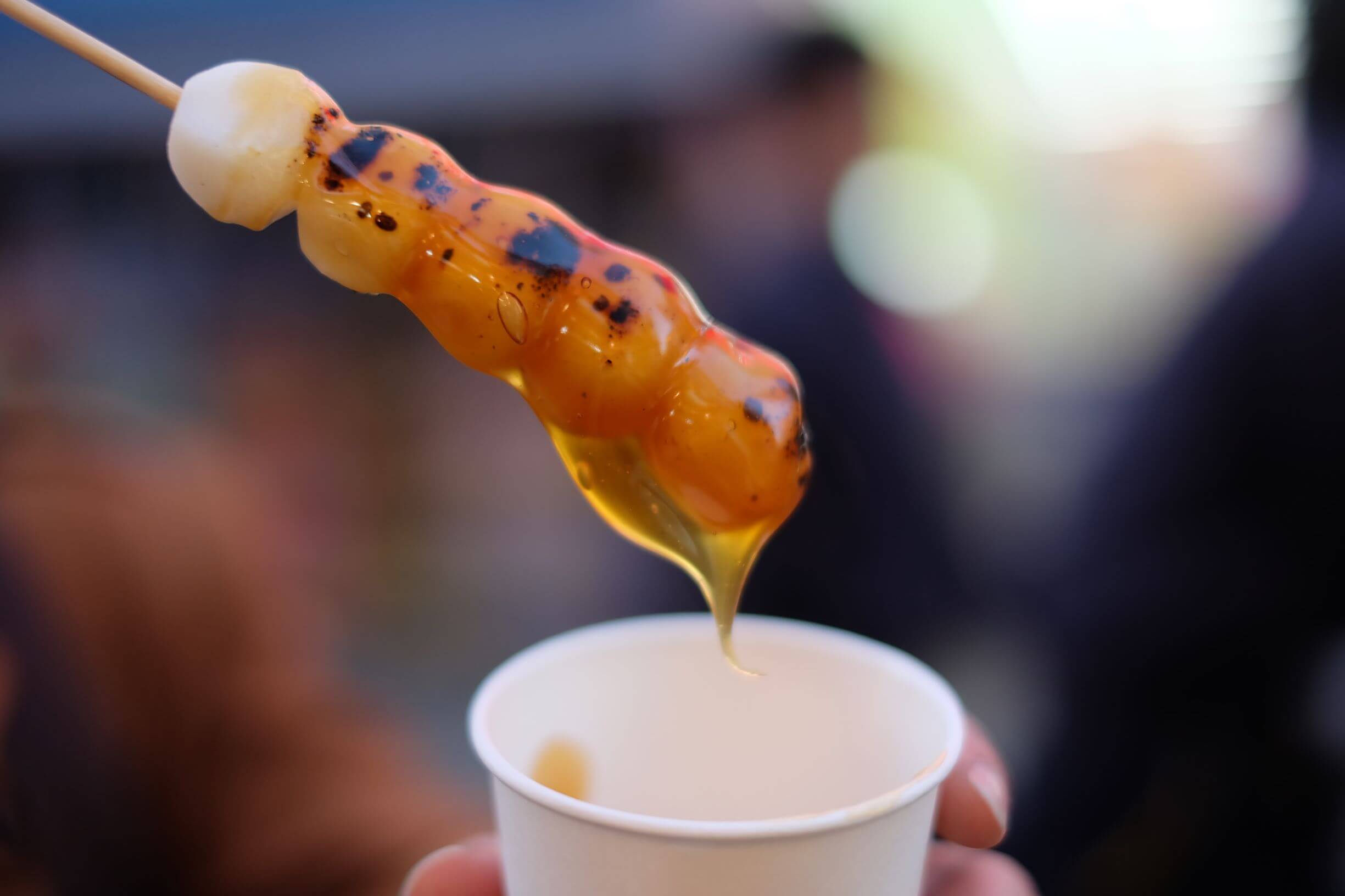 Dango is a sweet Japanese dumpling similar to mochi, but made of rice flour rather than rice itself. They are commonly served on a skewer and covered in a sweet soy sauce glaze. Because of its simplicity, dango is a great Japanese festival food and can be altered to fit with different seasons and themes. The dough itself can be colored with food dye or natural colorants like matcha, and different glazes can be used to change up the flavor. 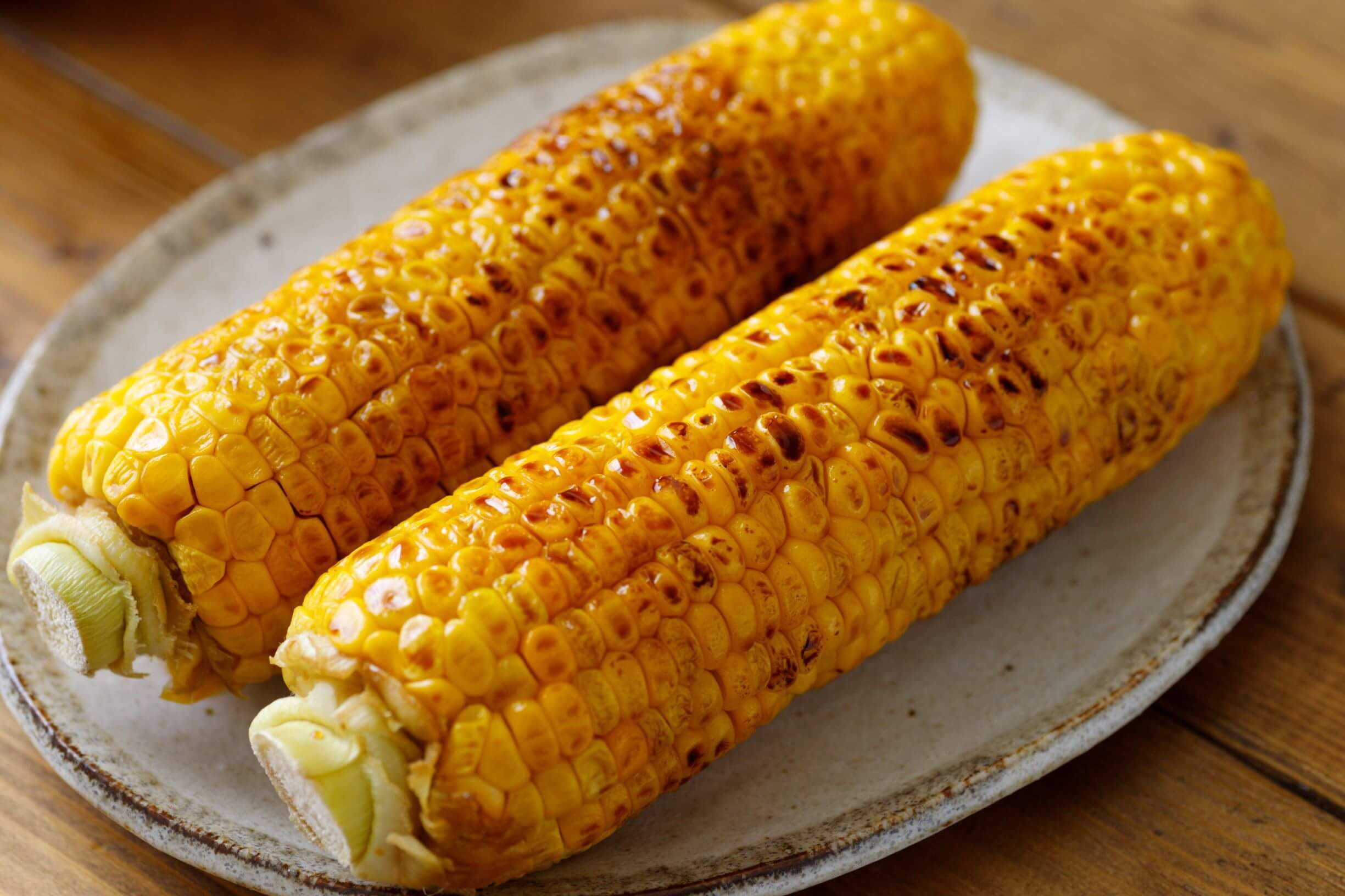 Grilled corn is a staple summertime food in many countries, Japan included. Tomorokoshi is Japanese grilled corn that is very popular at summer festivals. The corn is covered in a soy sauce glaze made with mirin and sugar, and it is a great food to enjoy while you walk around, although you might want to have some floss handy! 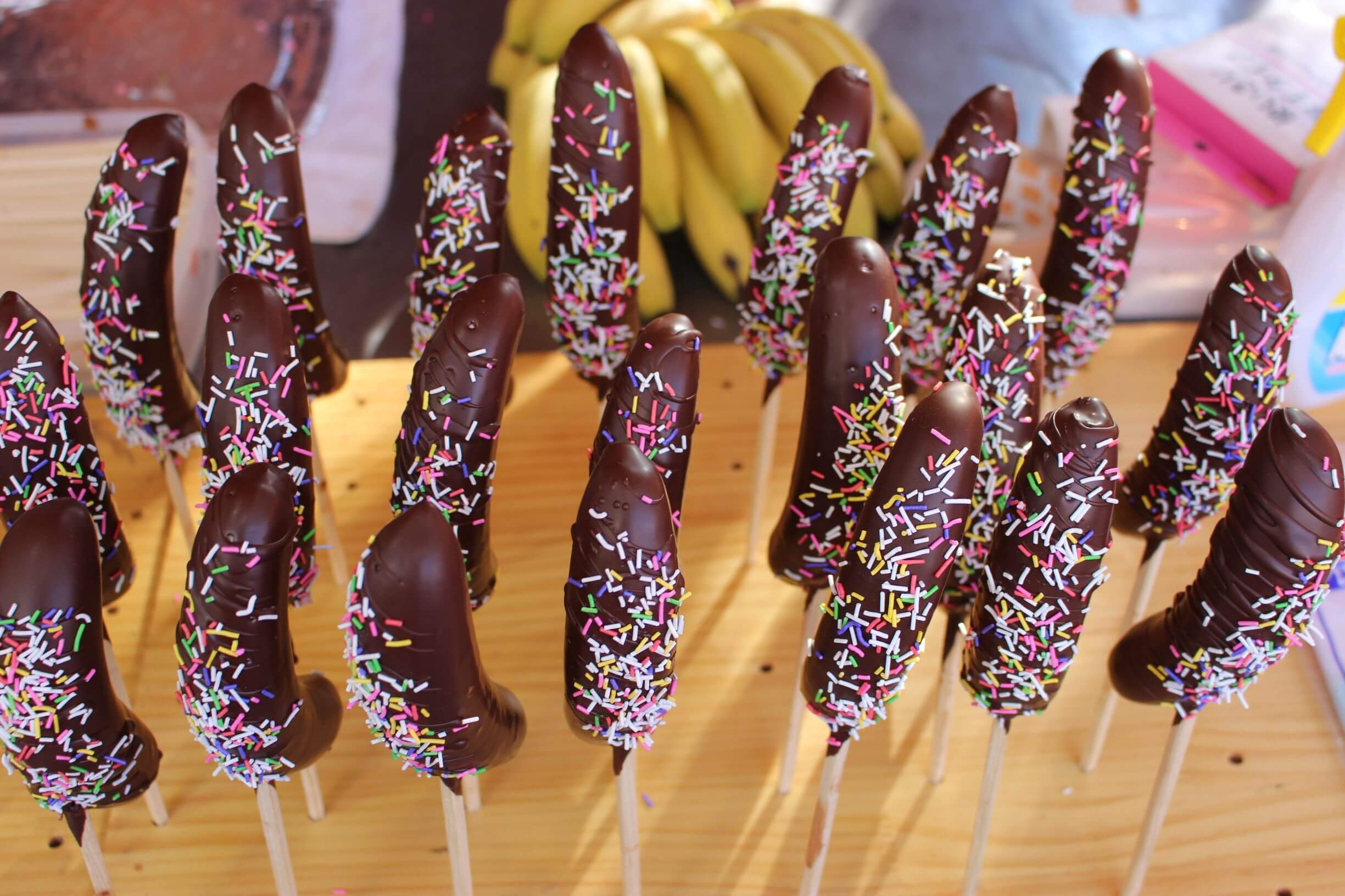 As straight-forward as the name says, choco banana is a Japanese chocolate-covered banana that is very popular at summer festivals. It may sound simple, but it is a refreshing summer treat that people love. Before the chocolate sets they are often decorated with sprinkles to give them some pizzazz. 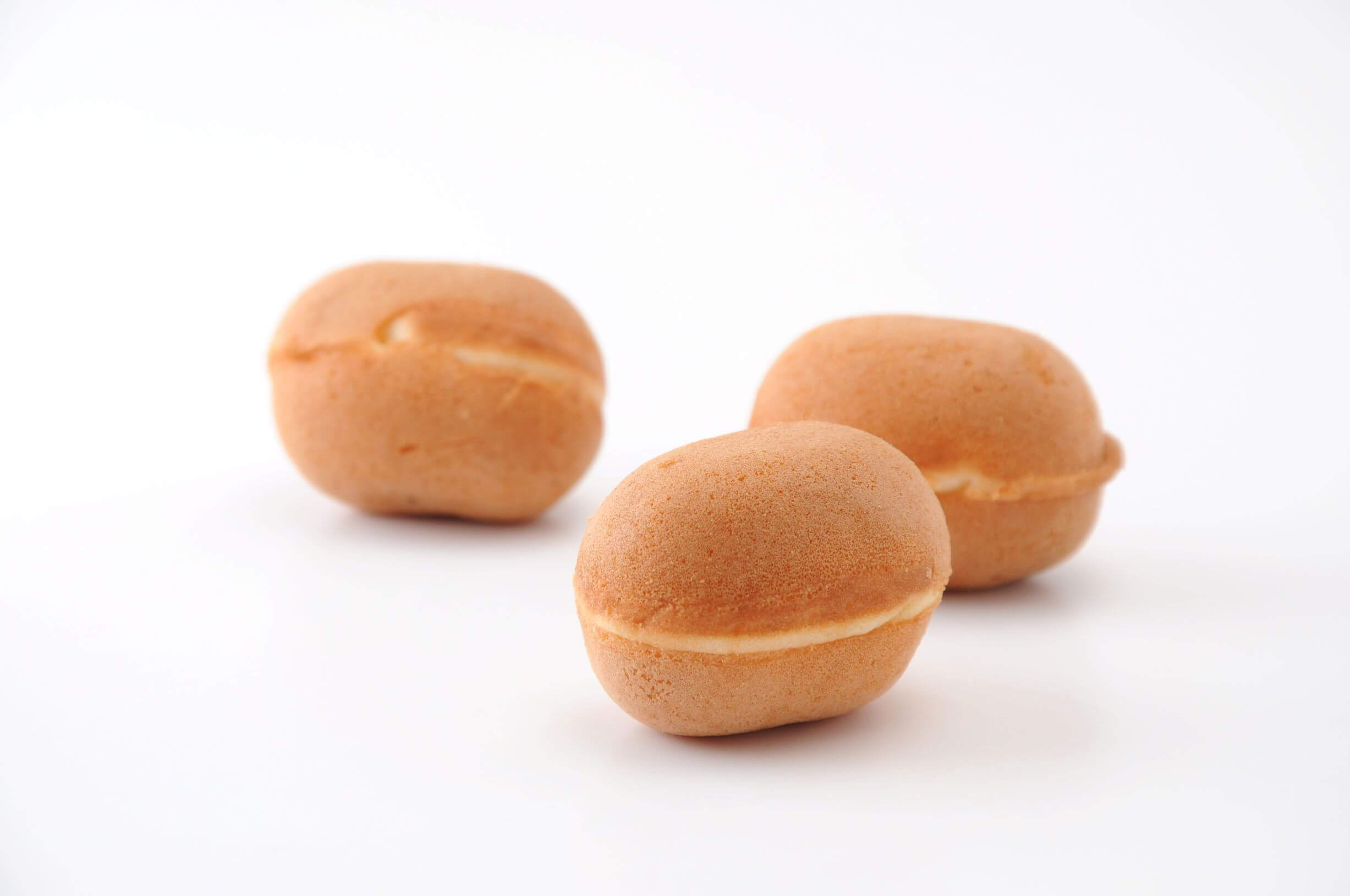 Baby castella is a bite-sized version of traditional Japanese castella, a sweet and fluffy sponge cake. These baby castella are small balls of cake with varieties including matcha and honey. They can also be filled with red bean paste or cheese, but traditionally don’t have a filling. 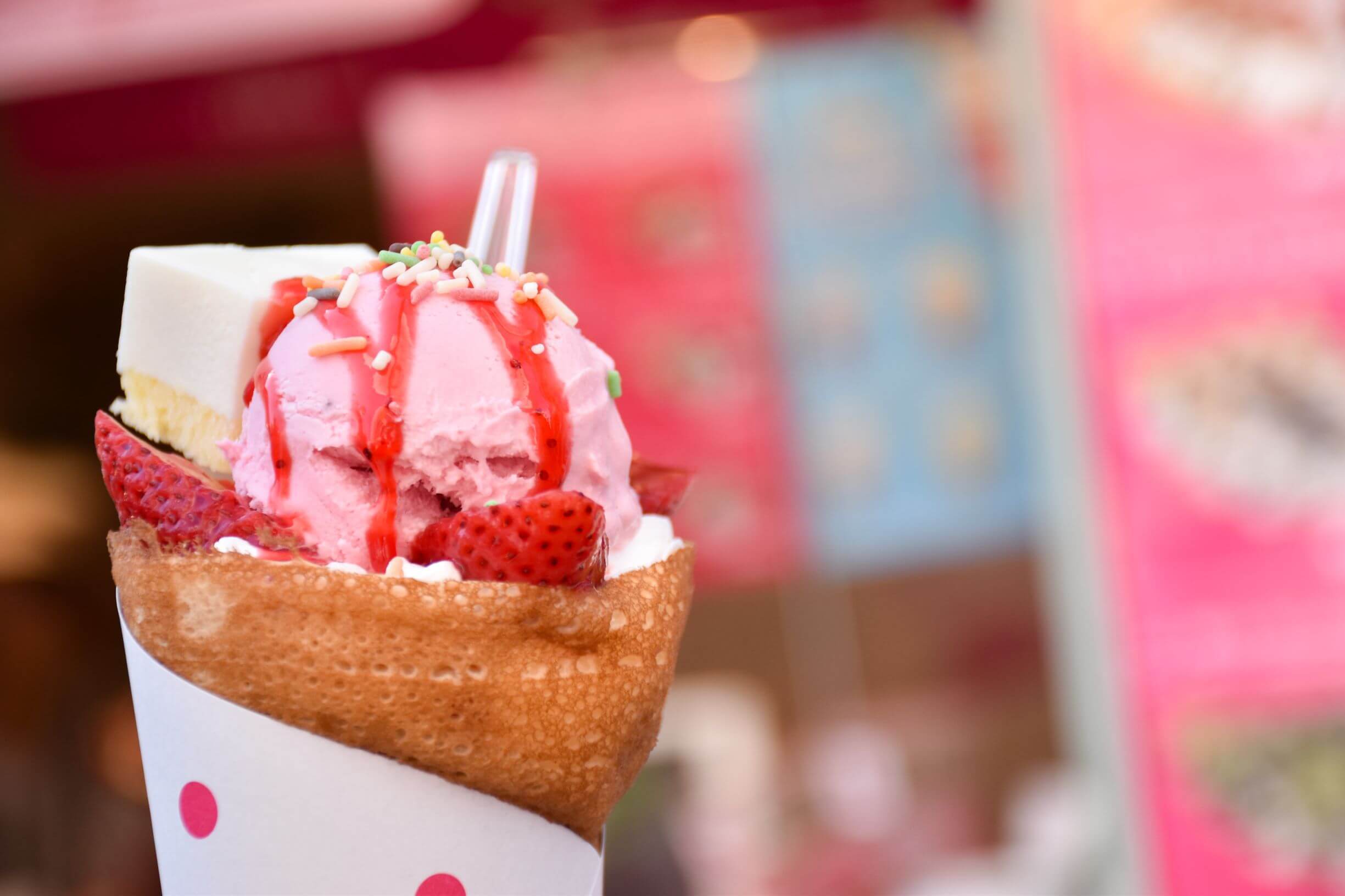 Japanese crepes are cooked much like traditional French crepes, similar to a thin and delicate pancake. In Japan, they are served in a cone and filled with various things like fruit, jam, custard, ice cream, and whipped cream. There are also savory varieties as well, although the sweet crepes are most popular. 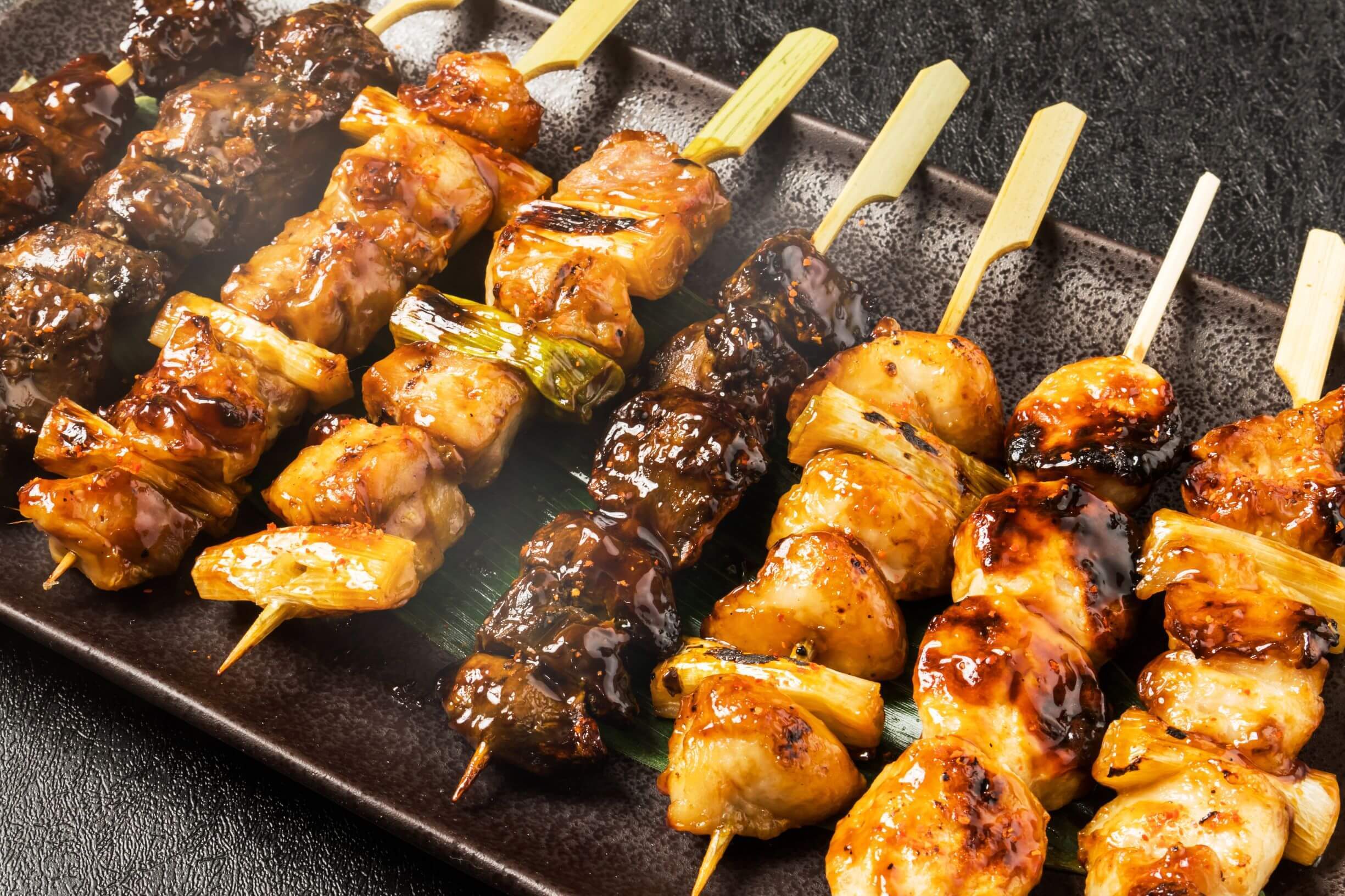 Yakitori is skewered grilled chicken that can be made from various parts of the chicken, including the wings, thigh, breast, skin, liver, and even cartilage. If you are a little hesitant about eating cartilage, don’t worry, you can choose what kind of yakitori you would like. Covered in either a salty sauce or a sweet and salty sauce, yakitori is a filling and classic Japanese festival food. 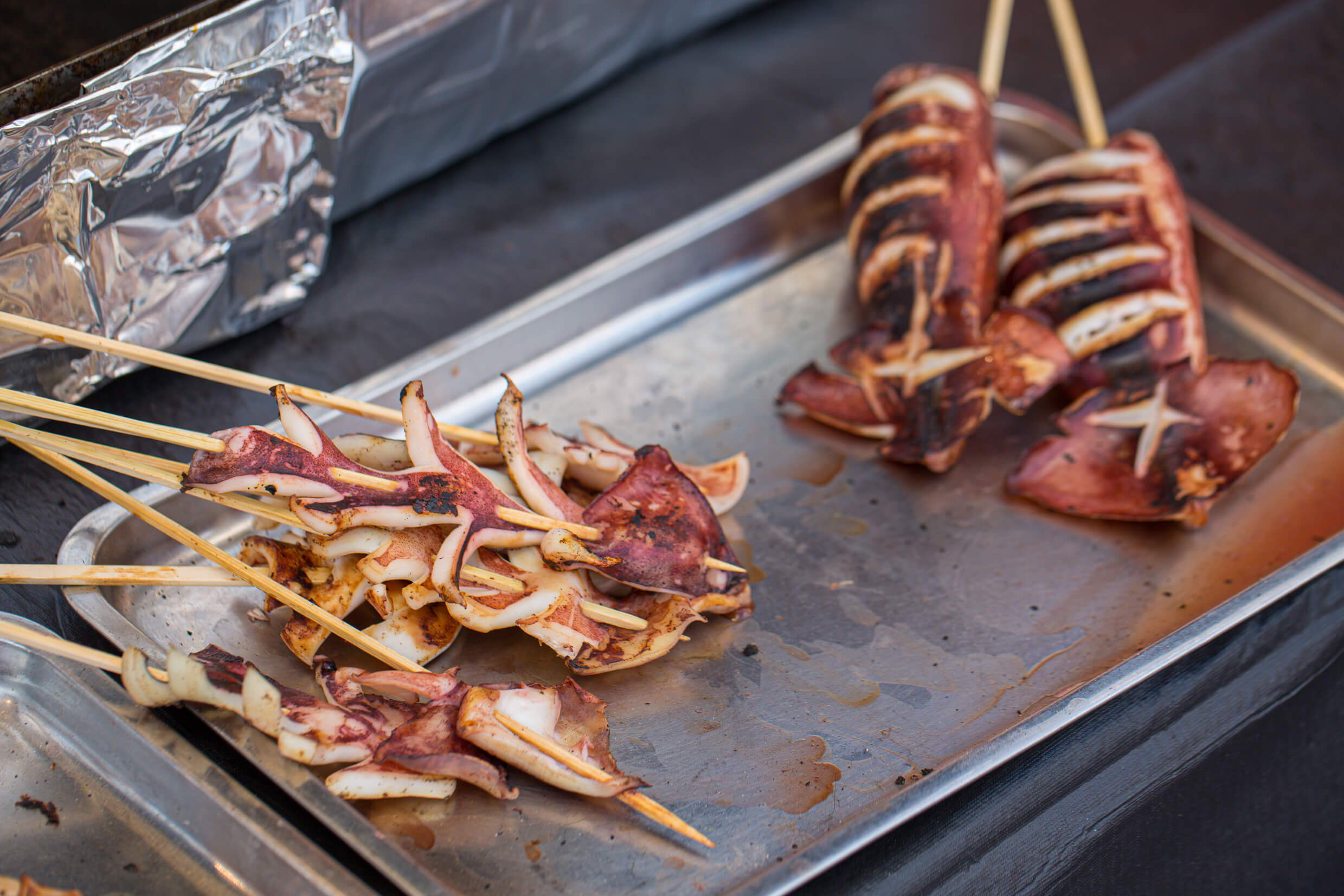 Ikayaki is grilled squid covered with a soy sauce glaze, typically served on a skewer. Yakitori can be served cut into rings, as just the tentacles, or as the entire squid (gutted, of course). A whole squid probably doesn’t come to mind when you think of portable foods, but Ikayaki is surprisingly easy to eat thanks to the skewer, and it is a very popular Japanese street food. 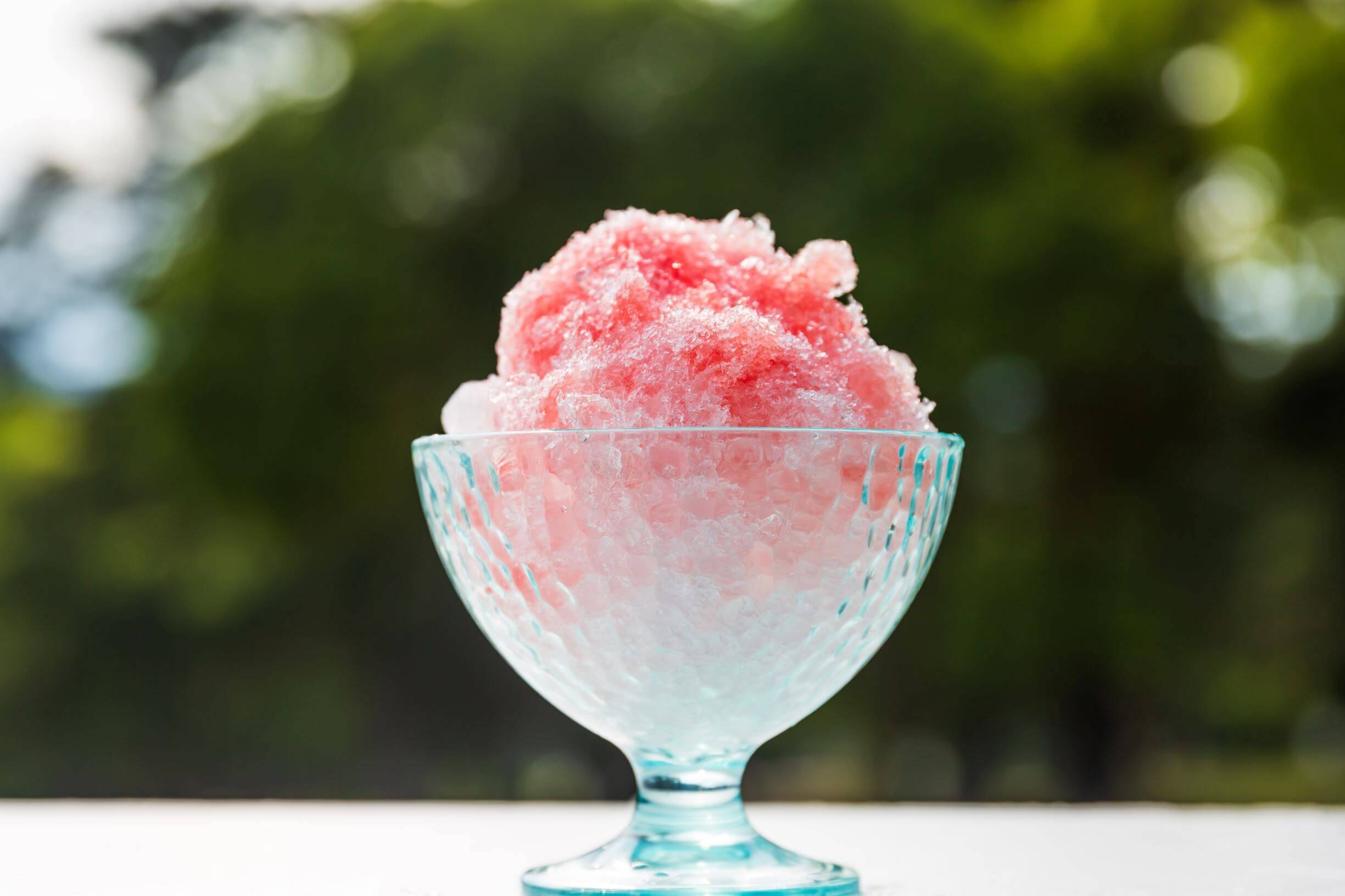 Kakigori is a Japanese shaved ice dessert, similar to American snow cones. They are sweetened and flavored with different syrups, making for the perfect way to cool down at a summer festival in Japan. 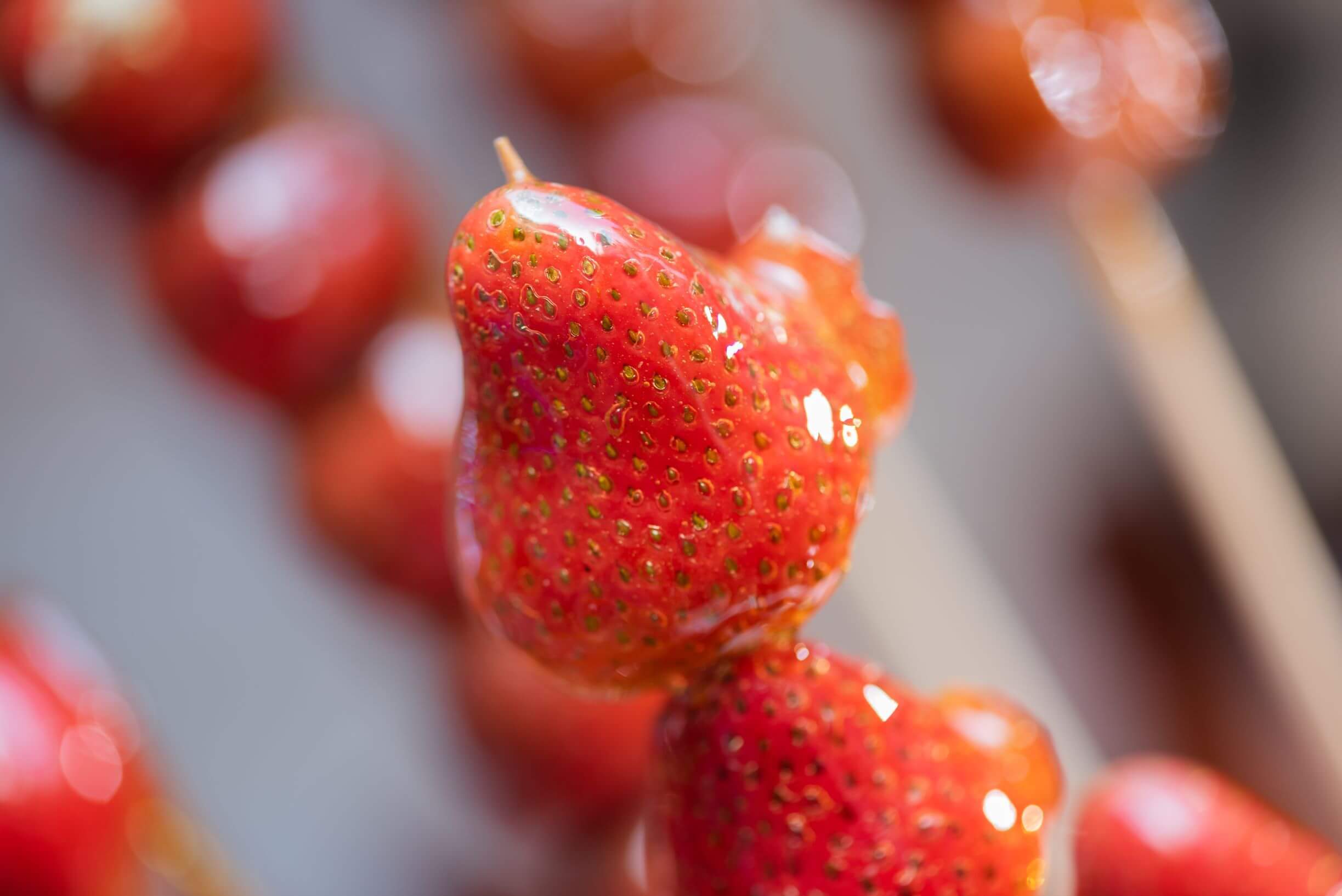 Candied fruits are a great Japanese festival food that allows for a lot of variety. Ringo ame are Japanese candy apples, very similar to the American version and a classic dessert. Ichigo ame are Japanese candied strawberries, served with multiple strawberries on a stick resembling a row of little hearts. Mikan ame are candied mikan, which are small citrus fruits sometimes called “tiny tangerines.” 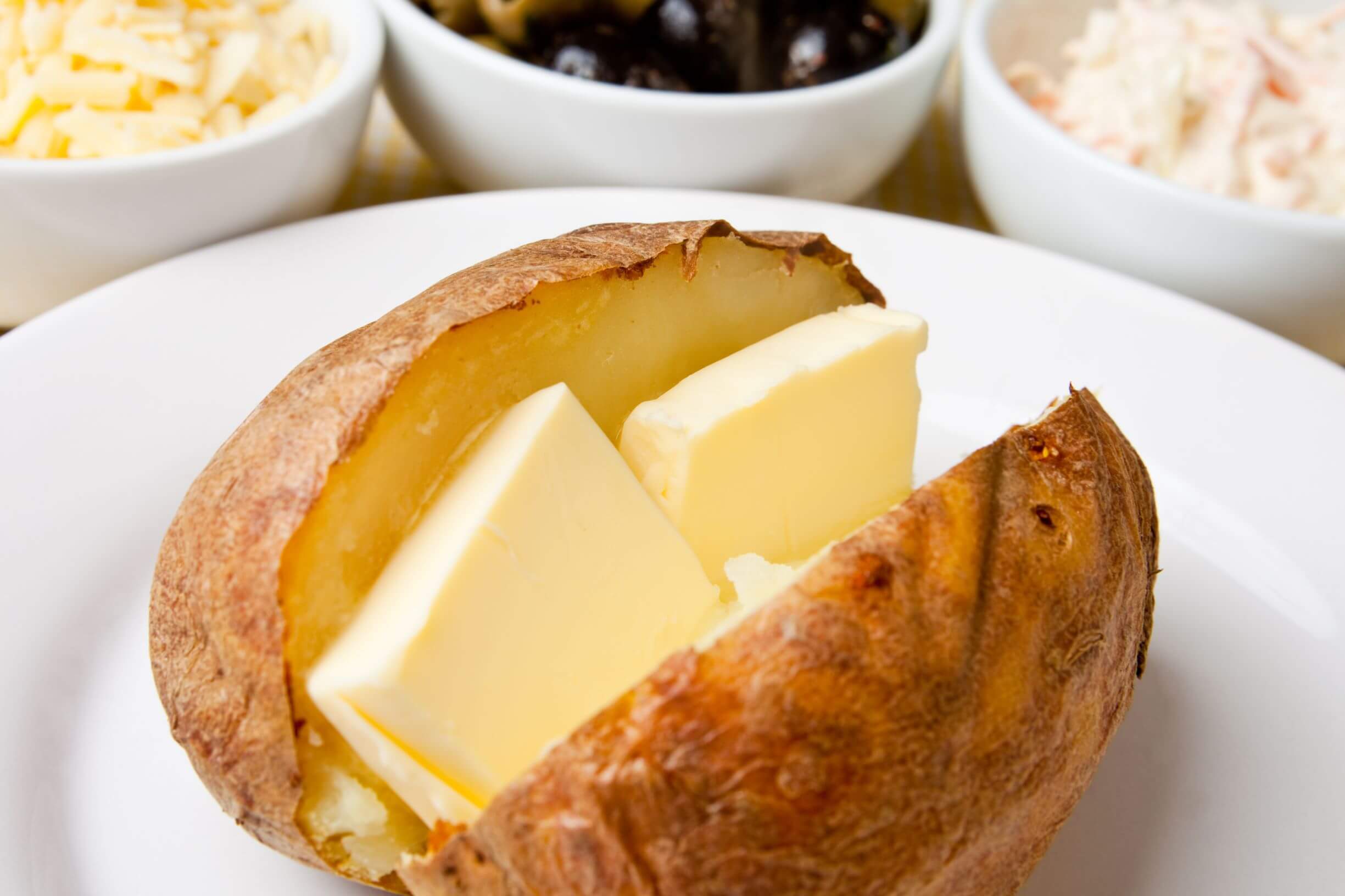 Jaga bata is a simple grilled or baked potato served with butter. While jaga bata doesn’t necessarily draw the eye with its presentation like some other Japanese street food, it proves that appearances aren’t everything. Jaga bata is a classic Japanese comfort food that people keep coming back for. 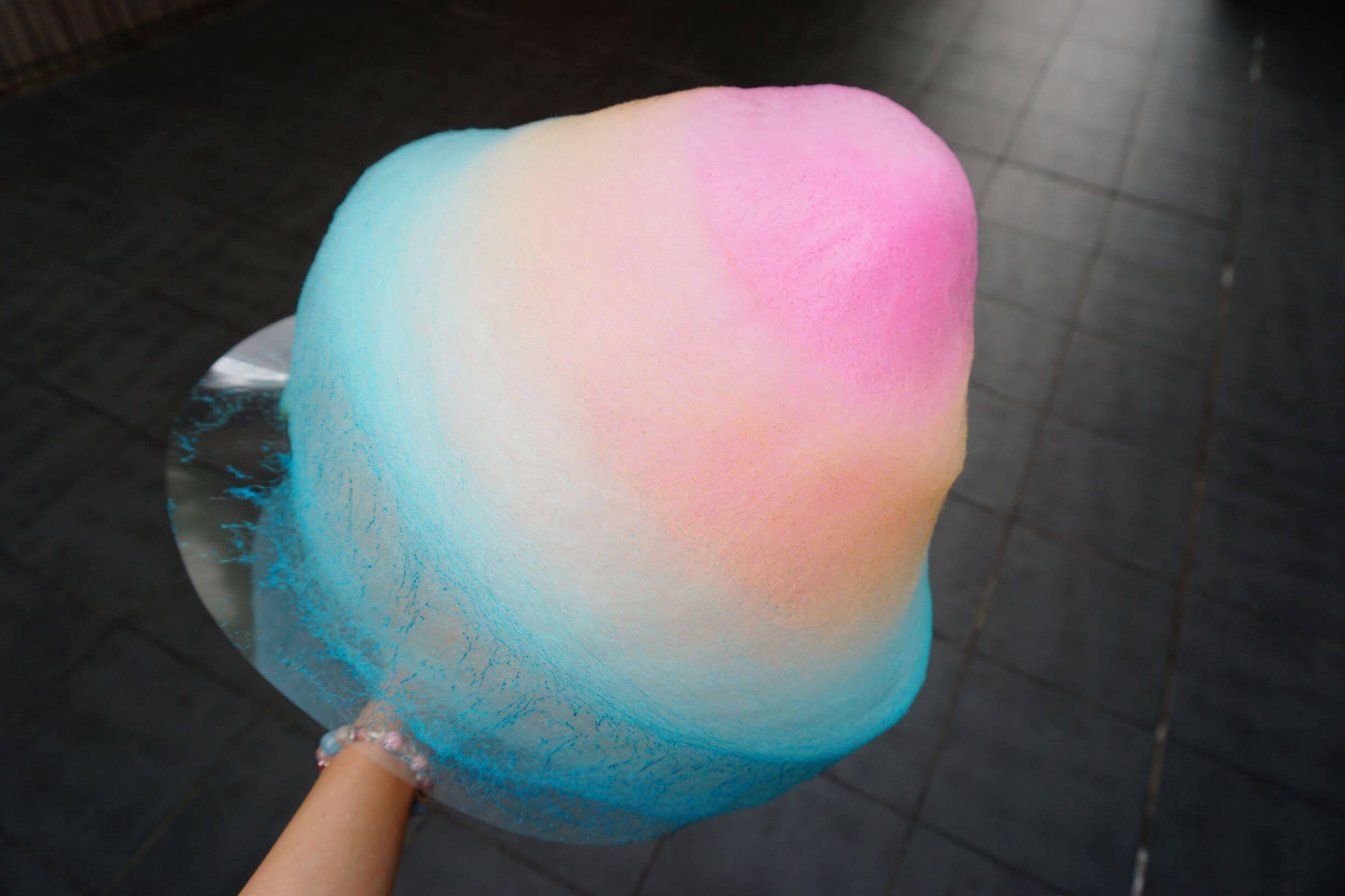 Wataame is Japanese cotton candy, and just like in America, it is very popular with children (although age shouldn’t stop you from enjoying this sugary treat!). Wataame is served on a stick straight from the machine or in a bag, which is typically decorated with popular manga characters. 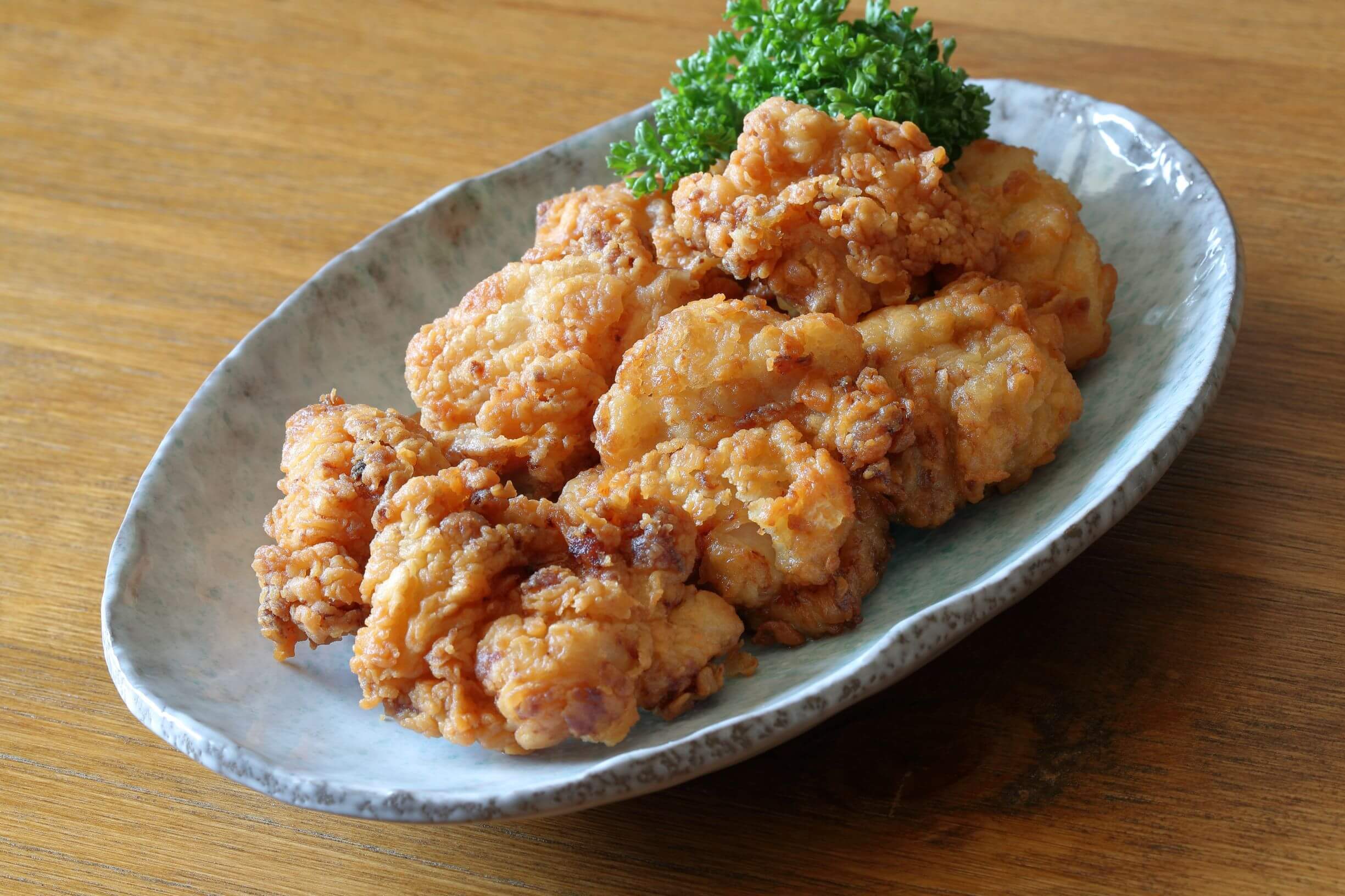 Karaage is a type of Japanese fried chicken that is very popular at Japanese festivals. Marinated in soy sauce and sake and prepared in small bite-sized pieces, karaage have the portability of American chicken nuggets with deeper, more grown-up flavors.

Take a look at summer Japanese festival foods with our video!