Festivals, or matsuri, are a long-standing Japanese tradition. With approximately 300,000 traditional matsuri throughout the country annually, there are festivals for all sorts of reasons. Some may honor specific groups of people, commemorate an important historical event, celebrate a holiday, and so much more.

One popular upcoming festival is Hinamatsuri, or “Girl’s Day.” Some people flock to Japan to experience a wonderful and unique hinamatsuri festival firsthand, but it is still possible to celebrate this joyous occasion from afar with some help from Bokksu’s delicious assortment of Japanese snacks. 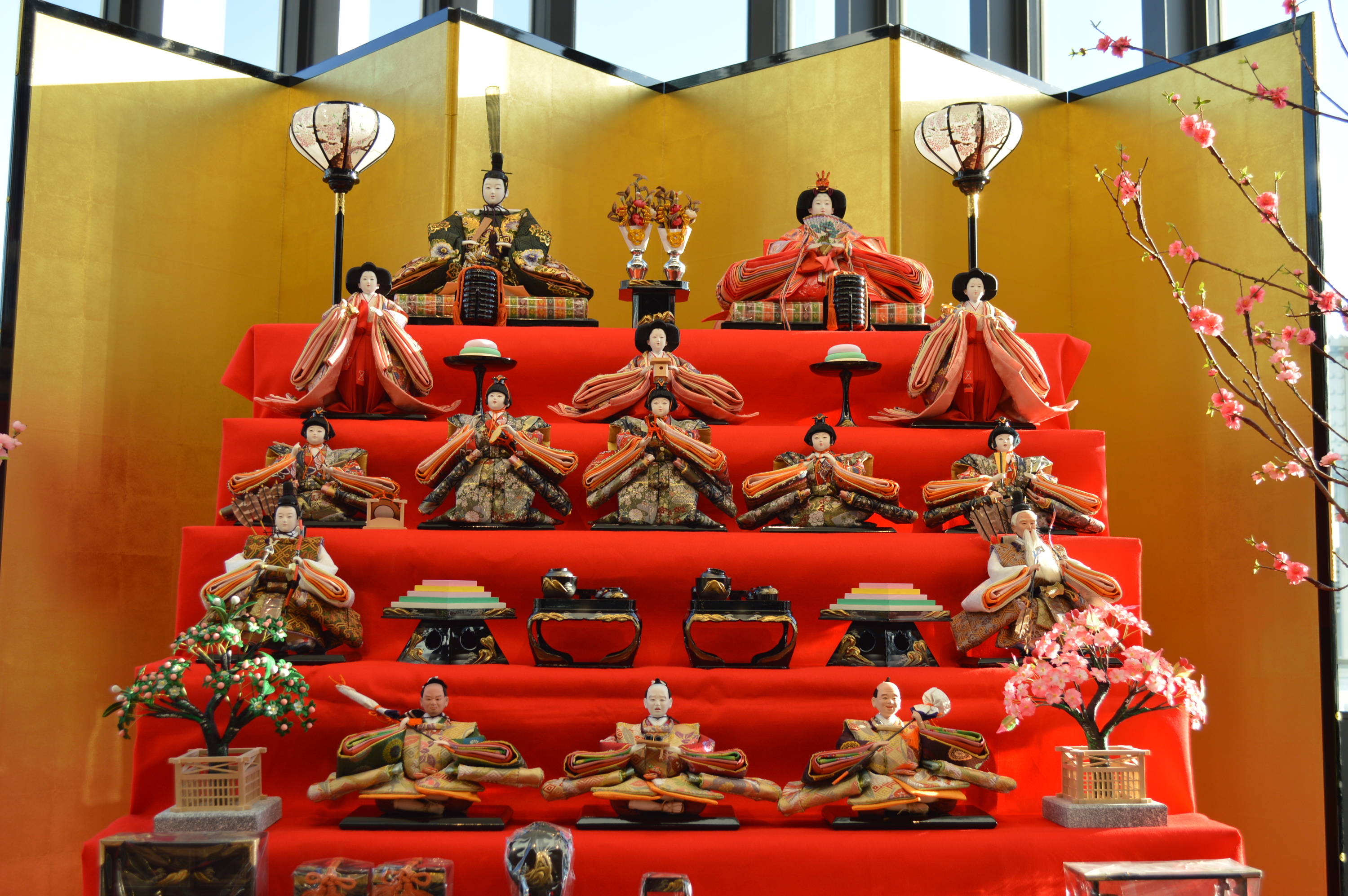 Hinamatsuri is also known as “Girl’s Day” or “Doll’s Day. ” On hinamatsuri, Japanese families celebrate their young daughters by praying for their health, good fortune, and prosperity. It is one of Japan’s five sekku, or seasonal, festivals. These sekku festivals are celebrated on the first day of the first month (1/1), third day of the third month (3/3), fifth day of the fifth month (5/5), and so on. As the third sekku festival, hinamatsuri is celebrated annually on March 3rd.

The origins of many Japanese traditions and festivals can be traced back thousands of years, and hinamatsuri is no different. In its early days, it was known as the Peach Festival because it took place when the peach trees blossomed. Dolls have been an important part of hinamatsuri and remain a large part of the celebration today.

This began during the Heian Period (794–1185), when people celebrated a similar festival where they prayed for good fortune. People would place straw or paper dolls on a raft and push them away down the river, as they believed the dolls would carry away any evil spirits and calamity with them. During the Edo Period (1603-1868), people began displaying these dolls in their home. 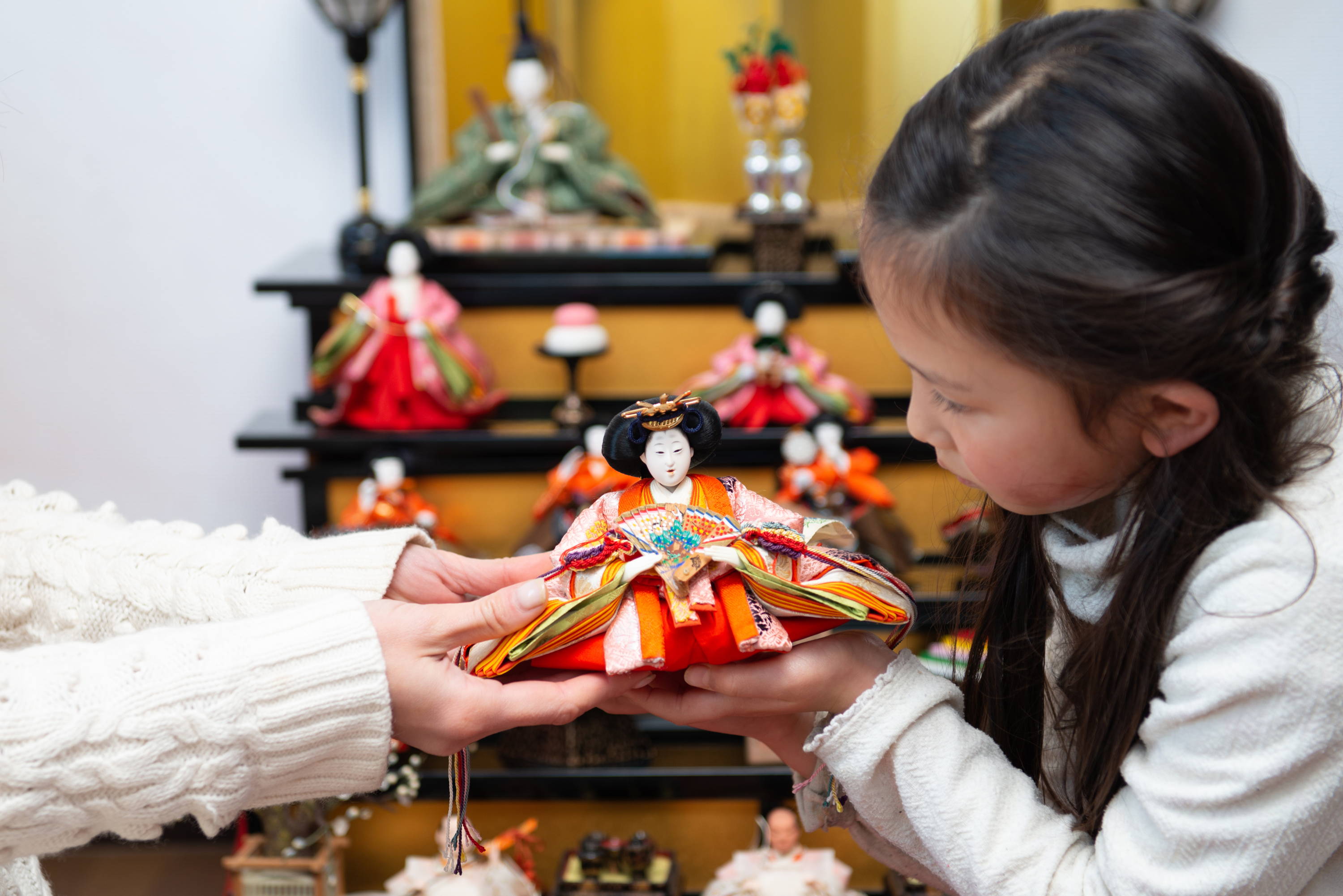 The celebration of hinamatsuri has evolved since its origins thousands of years ago. While some people still construct dolls and send them floating down rivers, most Japanese people celebrate by arranging hina dolls in their own home. Hina dolls are often passed down from generation to generation, but a new set may be purchased when a daughter is born. Whether it is a store-bought or heirloom set, families will make sure their daughter has a set of hina dolls before their first hinamatsuri.

For hinamatsuri, these ornate dolls are arranged in a specific tiered order on a red carpet or platform called a hinadan. Two dolls known as the dairi-bina sit at the top tier, and they represent the Emperor and Empress. For many families, this is the only tier set up, but there can be up to 6 tiers. On the next platform sit three san-nin kanjo, or court ladies. Musicians of the court or gon-nin bayashi sit on the third tier, with each of them holding a different musical instrument.

On the fourth platform sit two ministers, or daijin. They may also be known as the couple’s bodyguards, and this level features a table with gifts for the couple. Three helpers or shicho sit on the fifth level, and they are usually depicted as different types of drinkers. One cries while another laughs, and the third sits in anger. There may also be a mandarin orange tree or sakura tree on this level.

The bottom platforms display various household items. This is a general arrangement but certain tiers, figurine placement, accessories, and numbers may vary according to familial or regional traditions. This ornate display is usually featured in one’s home beginning in February and taken down quickly on March 3rd. There is no specific date on which a family begins displaying their doll set.

In the days or weeks leading up to March 3rd, families host gatherings at their homes to show off their display. This differs from traditional Japanese festivals, which are often large gatherings in public areas featuring parades, dancing, fireworks, street vendors, artwork, and various other means of entertainment. However, there are still traditional festivals around the country even though hinamatsuri is primarily celebrated in one’s home with close friends and family.

One popular gathering is the Kaatsura Big Hina Matsuri. This festival started in 2001 and has quickly grown to feature over 30,000 hina dolls from all corners of Japan. Its Tomisaki Shrine is known for a collection of 1,800 hina dolls displayed on the stone steps; their dazzling nighttime illumination brings tourists flocking from all regions of the country and world. Its Katsuura City Art and Cultural Exchange Center displays around 8,000 more hina dolls, making it an ideal option for those who want to experience a festival firsthand.

Other festivals in Japan embrace the older elements of hinamatsuri, as people gather in large groups to send ornately decorated paper dolls floating down the river. Some take place the week before hinamatsuri, but others, such as the Nagashi Bina Festival in Yakage Town, are in late March. Many of these festivals, including the Nagashi Bina Festival, feature a procession of people making their way to the river beforehand. 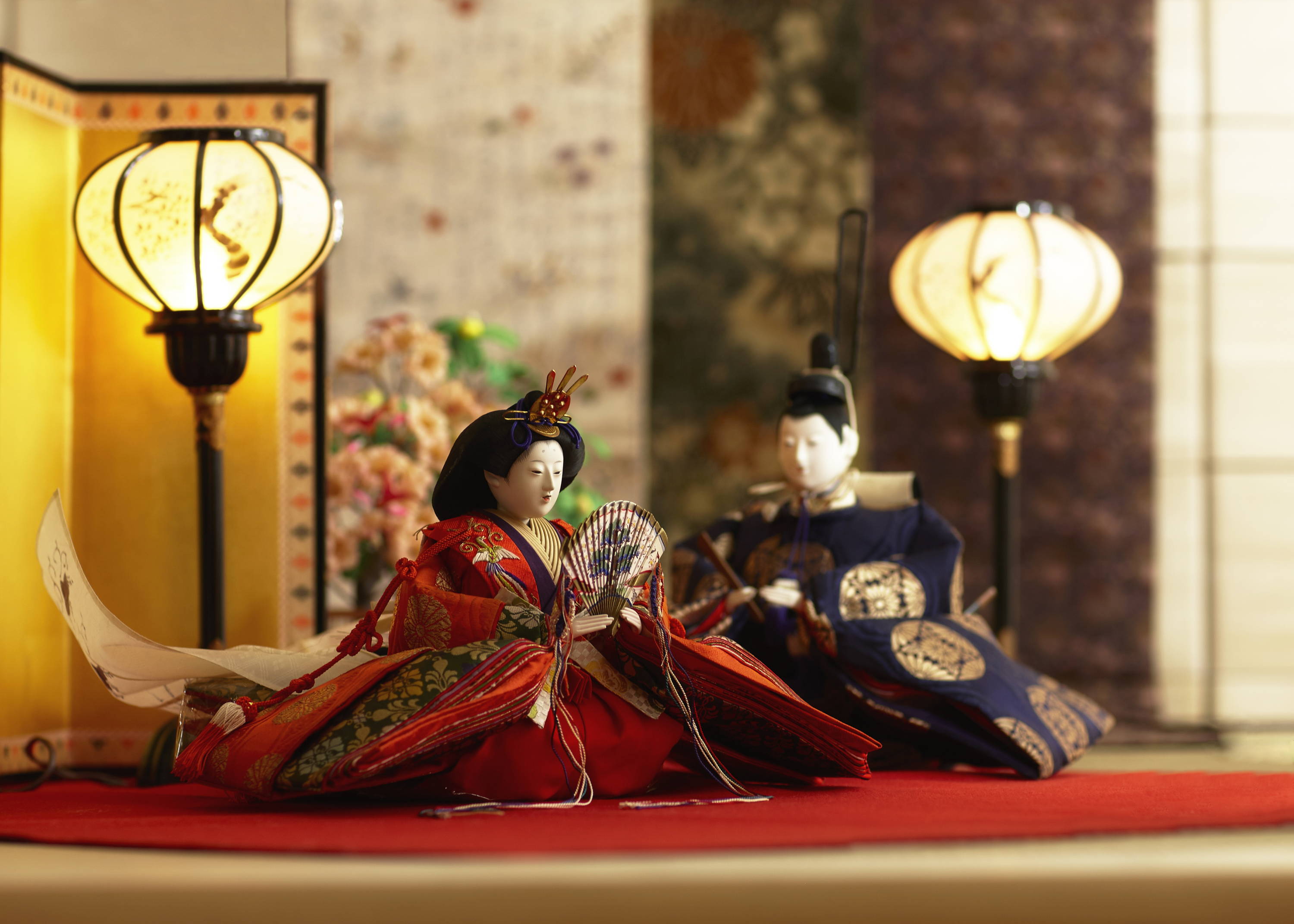 Hinamatsuri is very important in Japanese culture, as there are many symbolic elements present throughout the festival. It is meant to honor, celebrate, and inspire young girls throughout the country. The traditions of the festival are designed to help ensure that the young girls’ next year and life are filled with good luck and fortune. This festival is usually only celebrated in homes of families with daughters.

The hina dolls’ arrangement is meant to symbolize a Heian Period wedding, but it can also symbolize the Imperial Court of this era. According to Japanese tradition, leaving the dolls up for too long will hurt a daughter’s chances of getting married. This is why many families rush to take down their display on March 3rd, which can be a tedious and time-consuming process.

The color pink is closely connected to hinamatsuri because it is a symbolic color of femininity and spring in Japan. The peach blossoms that bloom in early spring are also a vibrant shade of pink. In the days and weeks leading up to the festival, many public areas are draped in different shades and styles of pink decorations. Many of the foods traditionally eaten at a hinamatsuri are also pink.

Hinamatsuri has also been influential in Japanese entertainment and pop culture. An anime and manga series titled "Hinamatsuri" follows a young man named Yoshifumi Nitta as he uses the supernatural powers of a young girl named Hina to rise through the ranks of the yakuza. The series was originally a manga, or Japanese comic and graphic novel series, but was also adapted into a 12-episode anime series.

Additionally, some have even speculated that the Mario franchise character Princess Peach pays homage to the holiday through her name and predominantly pink wardrobe. 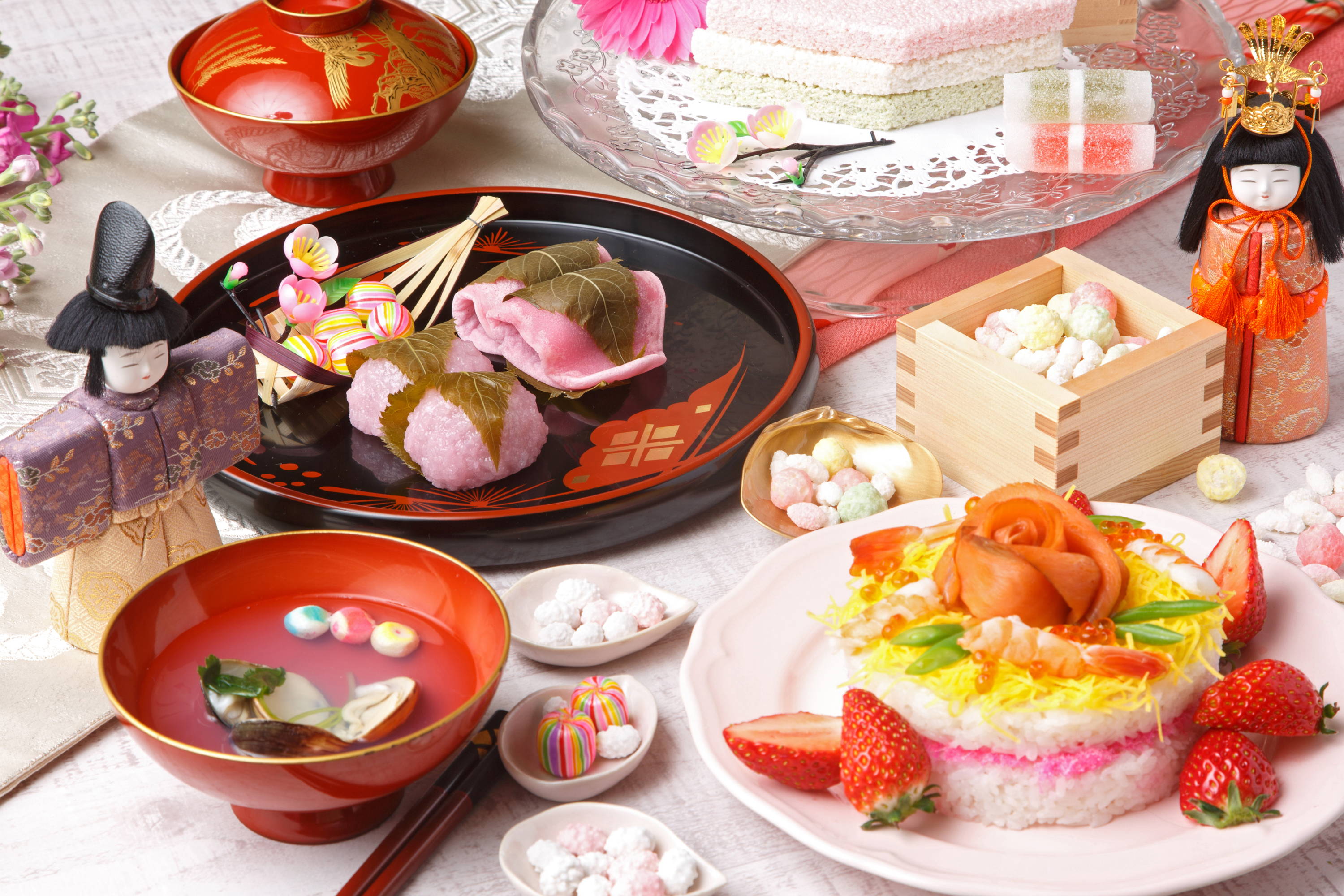 As with any festival, food is a very important component of hinamatsuri; Japanese people celebrate this joyous festival with all sorts of delicious meals and traditional Japanese sweets. Chirashizushi, also known as scattered sushi, is a common dish served on hinamatsuri. It is a rice dish topped with sashimi, and other ingredients of your choice such as vegetables and an egg, seasoned with vinegar, sugar, and salt.

Hamaguri ushio-jiru is another popular hinamatsuri dish. Also known as clear clam soup, this dish is very simple to make, and there are many variations that use different seasonings to create a unique flavor. Other dishes commonly served at hinamatsuri gatherings include cabbage ramen salad, edamame mixed rice, and salmon.

Two traditional hinamatsuri beverages are shirozake and amazake. These two drinks are very similar and often confused by people, but there are some differences. Both beverages are made from fermented rice, but shirozake is a sake with a high alcohol percentage while amazake contains little to no alcohol. Amazake is also usually made at home or store-bought while shirozake is primarily purchased at stores. Bokksu sells amazake-flavored mochi that are a great enhancer for any hinamatsuri celebration! 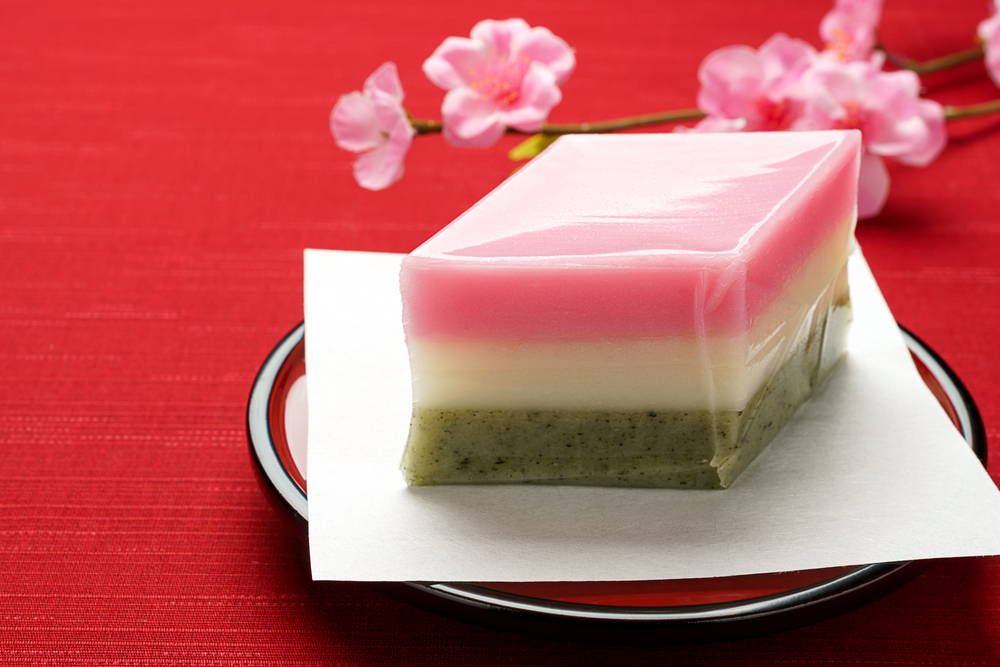 Hishi mochi is another dessert important to the celebration and rituals of hinamatsuri. This three-layered mochi is shaped like a rhombus or diamond to represent fertility. The layers are red/pink, white, and green, from top to bottom. The red layer is flavored with cape jasmine while the white uses water caltrop and the green mugwort. These colors together symbolize good health. While it is generally three layers, it can also be made in five or seven layer variations.

Sakura mochi is another dessert enjoyed during this festival. It is a pink-colored rice cake, or mochi, filled with a red bean paste and wrapped in a cherry blossom or sakura leaf. This is a common springtime dessert often associated with Girl’s Day and flower-viewing parties, another Japanese tradition.

Chi chi dango are very popular among children, which makes them a staple of hinamatsuri celebrations. This is a specific type of dango, which is a Japanese dumpling made from mochiko. Chi chi dango are soft, sweet, and chewy, and they are available in a variety of styles. They can be purchased at stores or made at home to allow for more flavor variety.

This dango is usually pink, in accordance with the tradition. However, there are also layered versions that incorporate the symbolic pink, white, and green colors similar to the hishi mochi treat. Bokksu sells similar treats such as kinako dango mochi and mocchan dango mochi.

Many of the aforementioned desserts are placed as offerings at the shrine. This is customary during hinamatsuri, as it is thought to increase the young girl’s chances of good health and fortune. However, some choose to use plastic desserts instead.

Want to have your own hinamatsuri celebration? Whether with an individual snack purchased on our snack market or a treat from our delicious and affordable subscription box, we’re here to make sure you have the best hinamatsuri possible!