One of the fun things to try in Japan is to walk around the city wearing Japanese traditional clothes. Seeing people wear kimono at a tea ceremony and spending a night in ryokan wearing yukata will add more memorable experiences to your trip to Japan. So today, I am here to share a little bit about Japanese traditional clothes for you to learn about it for your future trip to Japan. 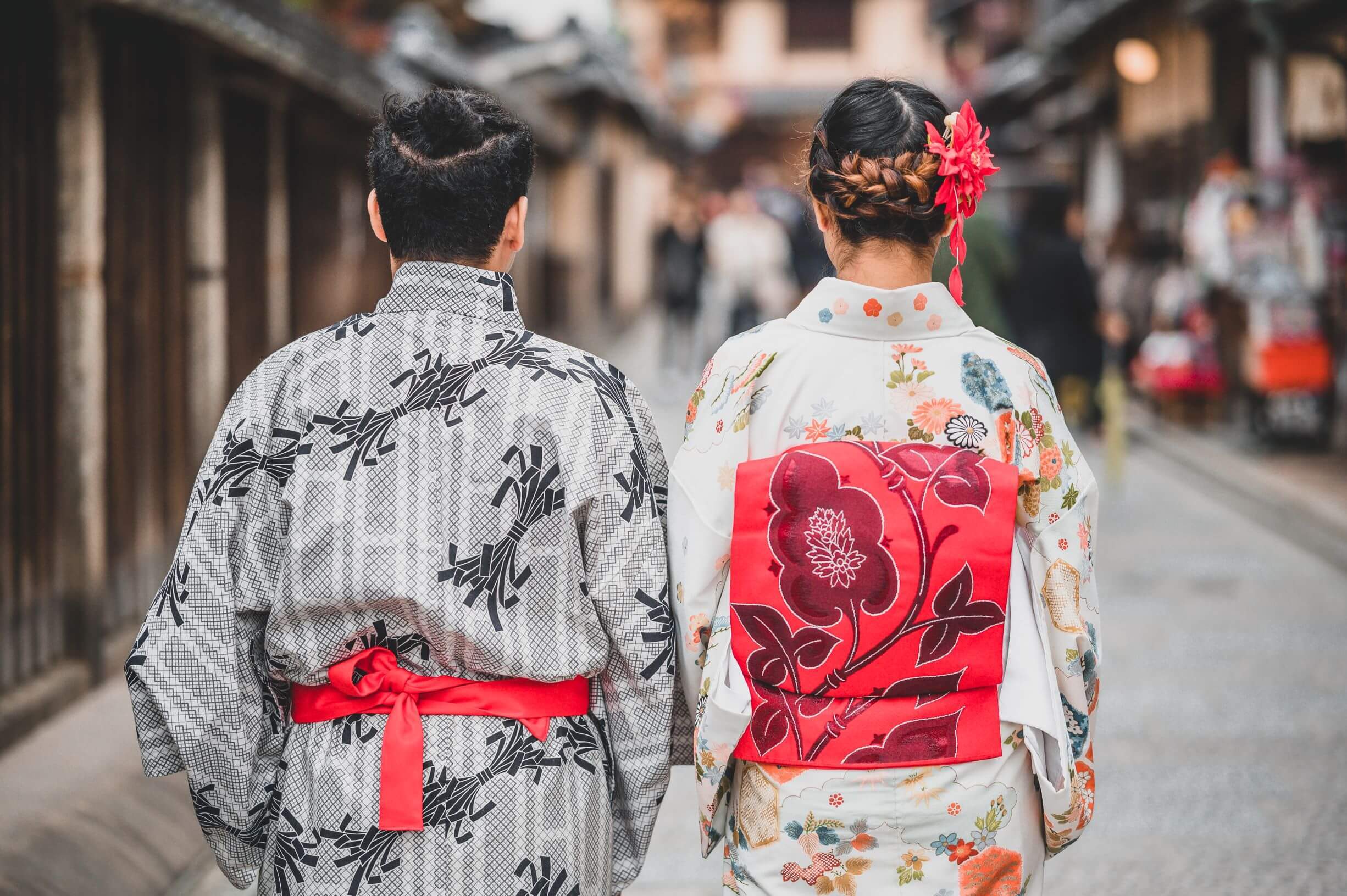 Kimono we now know today originated from China during the Tang dynasty (618 - 907 CE). Through immigrants, hanfu, Chinese traditional clothes, became the popular style in Japanese court society in the Heian period (794 - 1193 CE), and were worn only by the court people in the early period.

The first form of kimono worn in the court society was called jūnihitoe, which refers to a set of clothes that consisted of numerous layers of robes and coats. The color and combination of layers shown around the sleeves could tell the level of sophistication and the rank of the person wearing it.

The whole set of clothes could weigh up to 44 pounds, but during the Heian period, it became lighter and more stylised. This made the clothes more widely accessible to other classes, and today, a wide variety of kimono are worn by Japanese people. 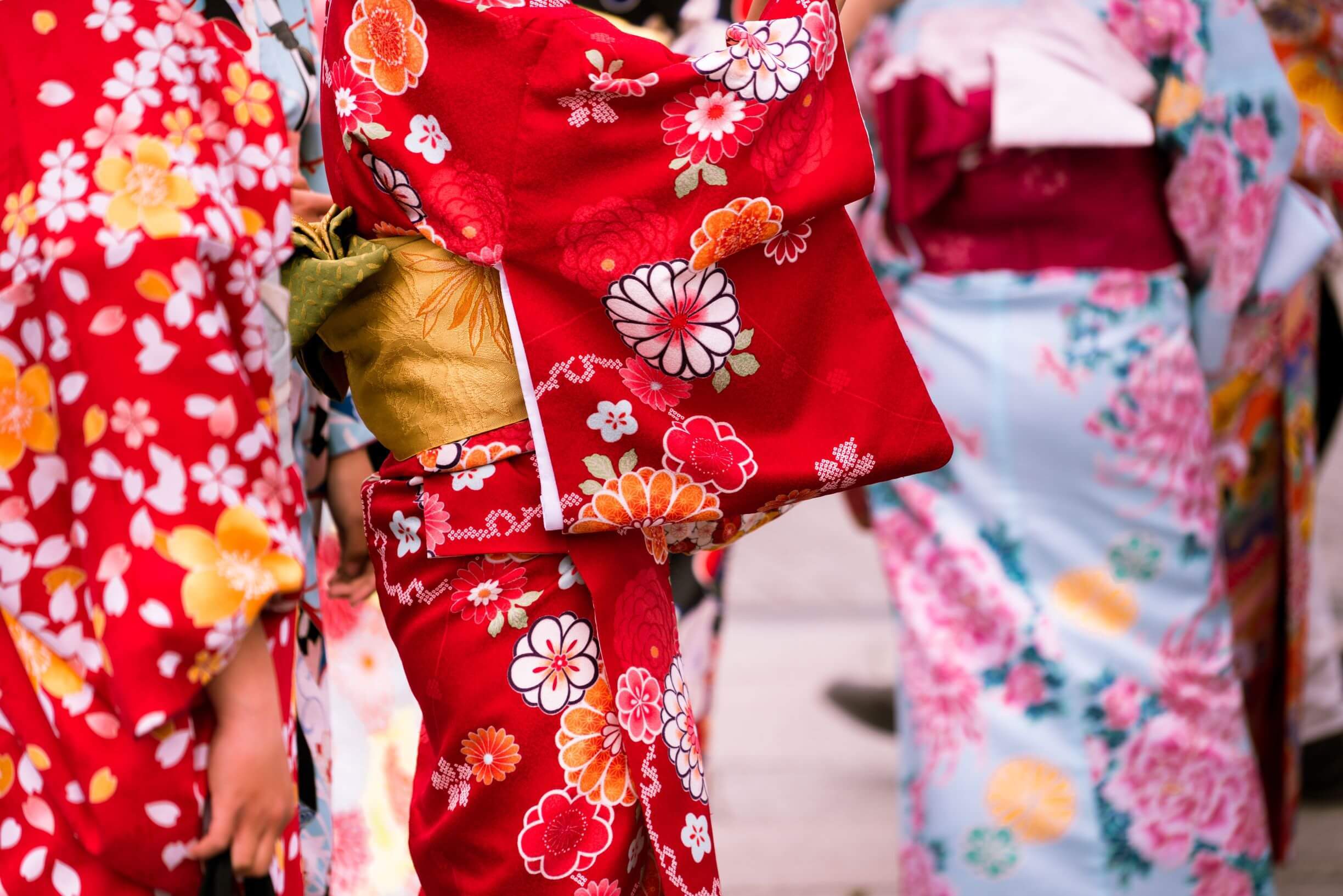 Meaning “a thing to wear,” kimono is still widely worn in Japan today, though not commonly as daily wear. People wear it like a gown and usually enclose it with obi (a long and thick belt-like cloth). When most people say “kimono” in English, we’re referring to those worn by women, though there are kimono worn by men as I discuss below.

The color of kimono often has symbolic meaning. Sometimes the color can represent the upcoming month, so in Japan, there are colors that represent each month such as peach for March, sky blue for August and maple for November. Or the color itself can have meaning. Red can mean wealth and power, white is considered pure and holy, blue represents peace and security, pink refers to vitality and femininity, yellow represents wealth and bravery and purple is for authority. Lastly, black is often associated with dignity and formality, but it can also mean sorrow and doom for a funeral.

Kimono can be divided into various types according to gender, age, marital status and occasion, and it is distinguished by the size of the cloth, fabric type, color and arrangement. 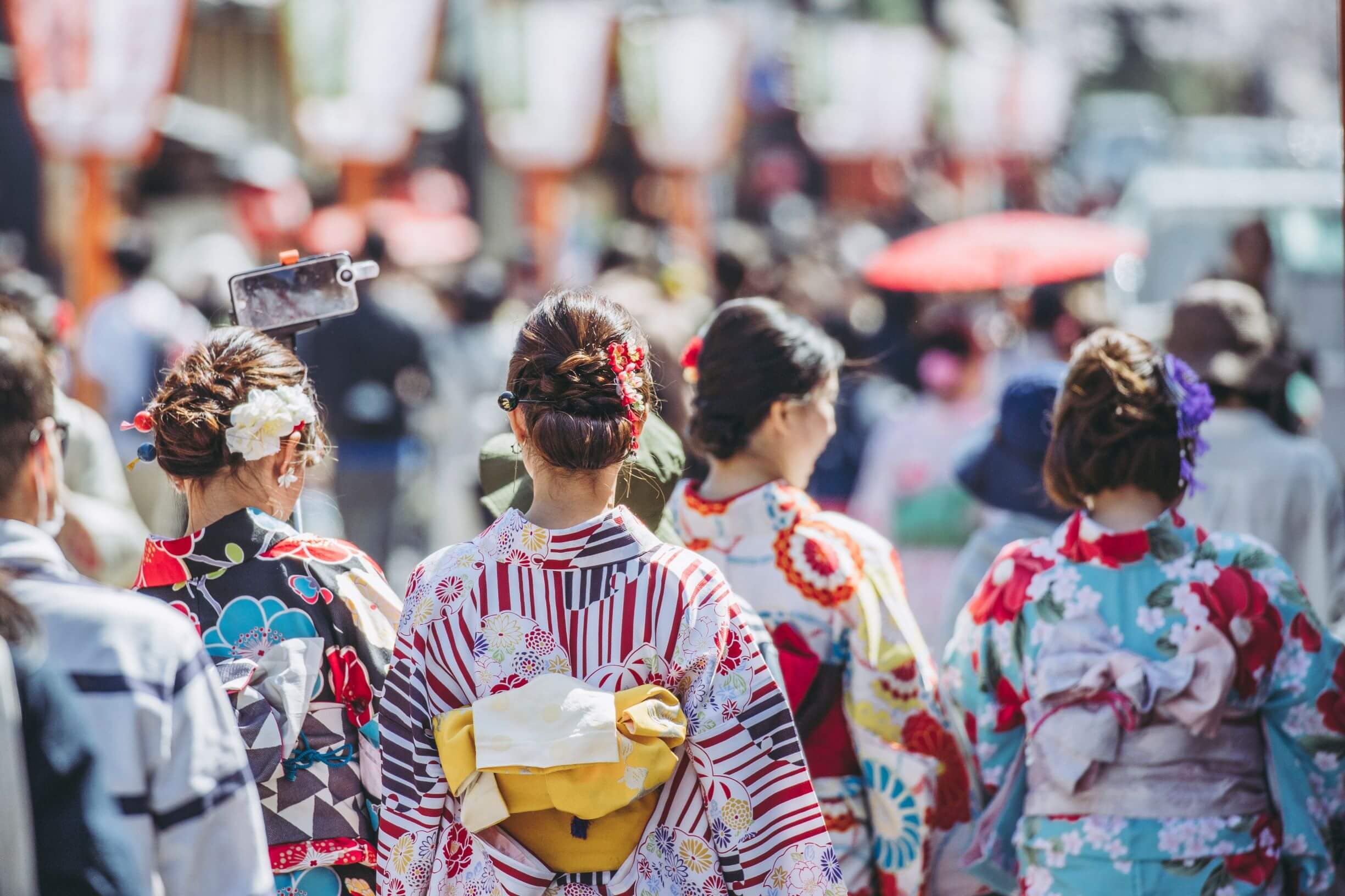 Yukata means bathing clothes, so it is most common around onsen towns, but it is also commonly worn casually both by men and women in summer especially for summer festivals and hanabi (firework) viewing. It can be worn at a slightly more formal occasion by using different obi and is usually made with cotton. Men’s yukata have shorter sleeves than women’s and both are usually worn with geta, Japanese traditional sandals, with bare feet.

Translated as “swinging sleeve,” furisode is the most formal kimono for unmarried women. It is made with silk and its sleeves can range from 2.7ft to 3.7ft long. Girls wear it at Coming of Age Day when they turn 20, and they can also wear it for formal events such as tea ceremonies and relatives’ weddings. After they are married, they wear homongi instead. 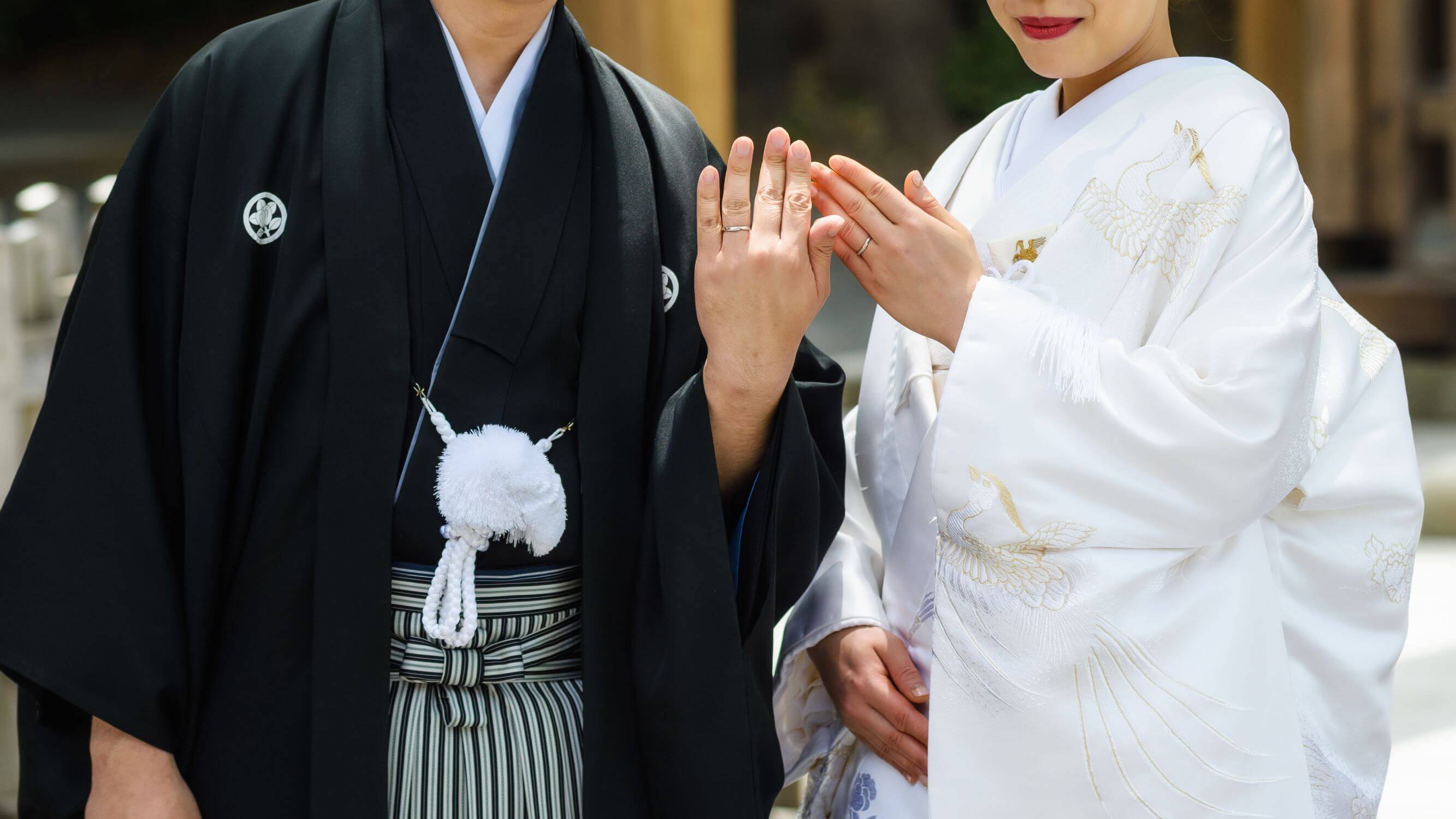 Wedding kimono often have white color without any pattern. That is because white is associated with purity, but it is also to remind the bride to dye with their groom’s color and accept the groom's family as her new family. The shiromuku kimono is an all white kimono that started in the Heian period and was worn only in samurai families. With a shiromuku kimono, the bride also has to wear white Wataboshi wedding hood in order to cover all of her with white. Shiro Kakeshita is shinto-style wedding kimono. It is also white, but it is different from shiromuku kimono as it does not require the hood and it has long sleeves just like furisode and a long hem.

After the wedding ceremony, the bride gets changed into reception kimono, which are more decorative and colorful. Hiki Furisode kimono is the most popular in black, but patterns are very decorative, often sewn with gold, silver threads. It has long sleeves that are connected to the back of the kimono, so it looks beautiful even from the back. Iro uchikake kimono is another popular type of reception kimono. It usually has patterns of turtles, cranes, bamboo and pine trees that are believed to bring good luck and longevity. The most popular color for iro uchikake kimono is red as it wishes good fortune and happiness to a new start. 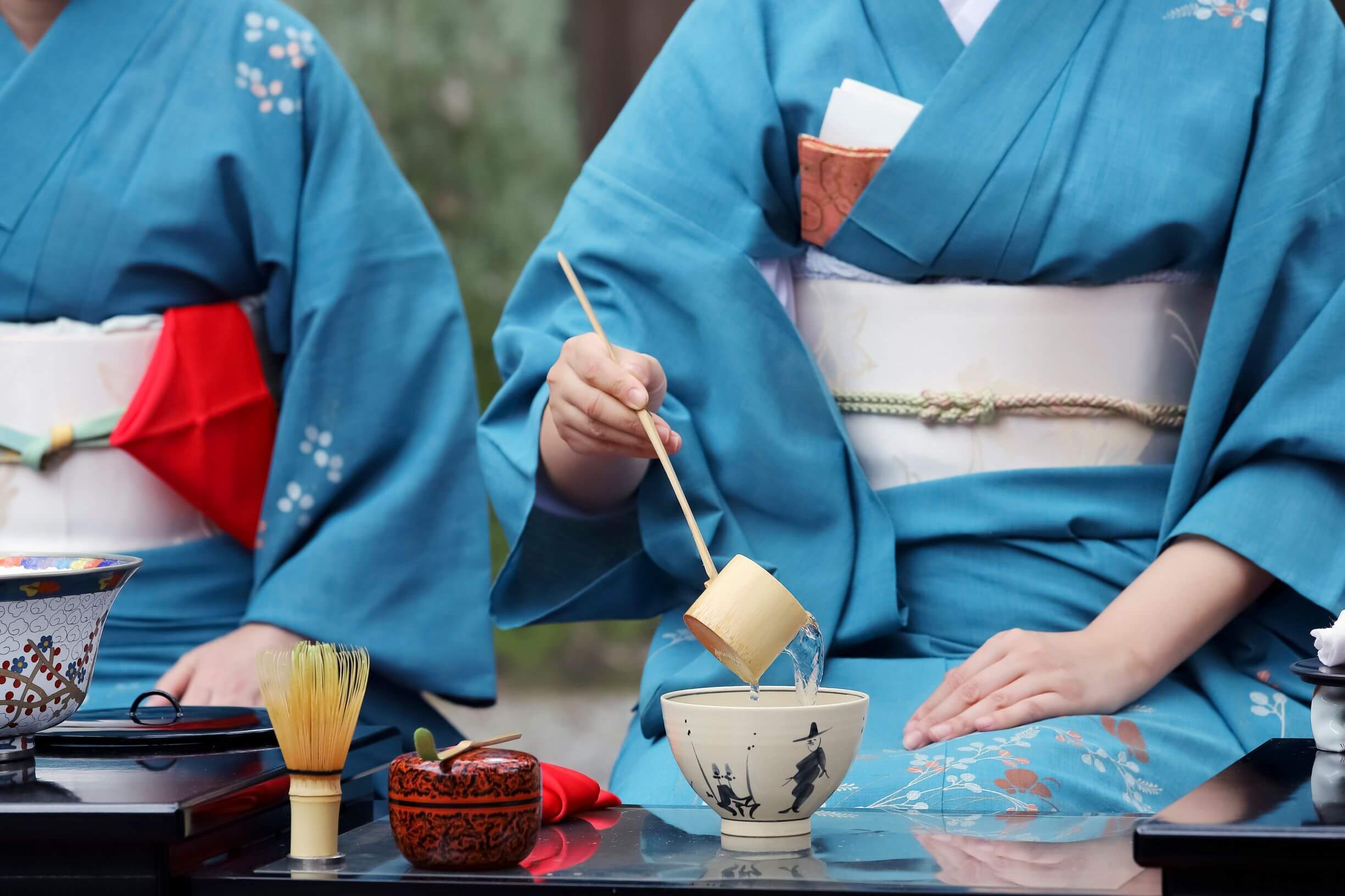 Iromuji is a single-colored kimono that people often wear for tea ceremonies. It is always made with silk, and is unpatterned, but can have designs woven in called rinzu. For tea ceremony, people cannot wear accessories as well because accessories might scratch tea bowls. This style of kimono can be worn in formal or casual settings, depending on the style of obi worn with it. White and black single-colored kimono though are not considered typical iromuji though, as they have different ceremonial connotations.

Susohiki is the longest kimono that geisha and kabuki actors wear. It can be up to 7.5 ft long and is never shorter than 6.5 ft. This kimono is also different from other kimono in the way it is sewn so that the back collar can be pulled further from the nape of the neck. 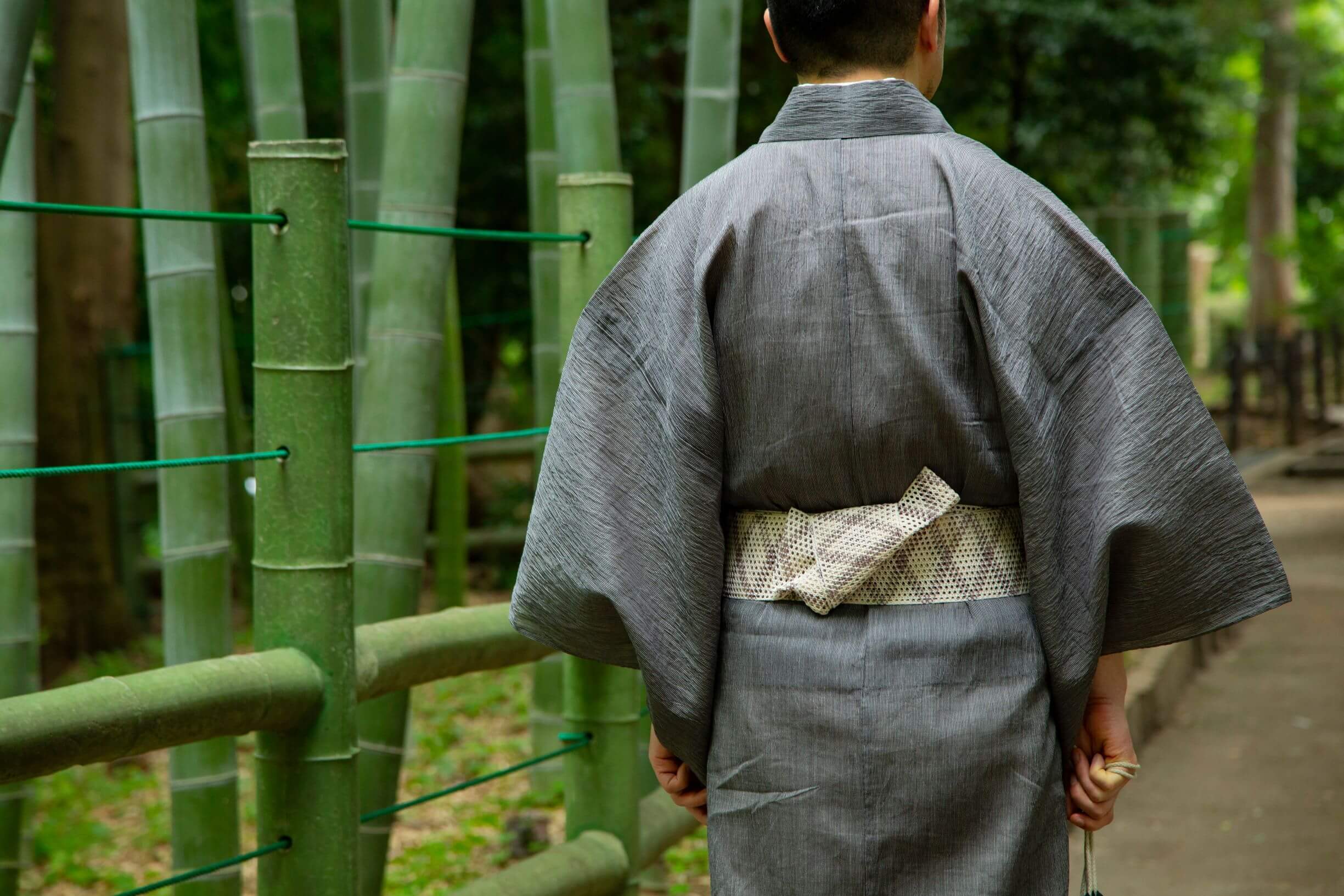 Men’s kimono are less complicated than those of women. The sleeves are shorter and narrower than women’s kimono and they have fewer layers and sets as well. They usually have darker colors such as brown, navy, green and black, while sumo wrestlers sometimes wear brighter colors.

Types of menswear are much simpler than women. Usually, men wear kosode, short-sleeve robes, and tie it with obi and on the bottom, they wear hakama as a trouser. Hakama are divided into two types, one that looks like a long skirt and another type that looks like long pants, and they can be worn by both men and women. Over kosode and hakama, people wear haori, a jacket that covers down to their hip or thigh.

Hoari is usually left unclosed, but it can be closed using a string. In the past, wearing haori could be seen as a sign of wealth and were considered more formal than they are now. Similar to haori are the hanten and happi, both types of light jackets. Hanten are often padded for warmth in winter time, while happi are commonly seen at festivals worn by stall owners, and they may have their businesses name emblazoned on it as wearable advertising. 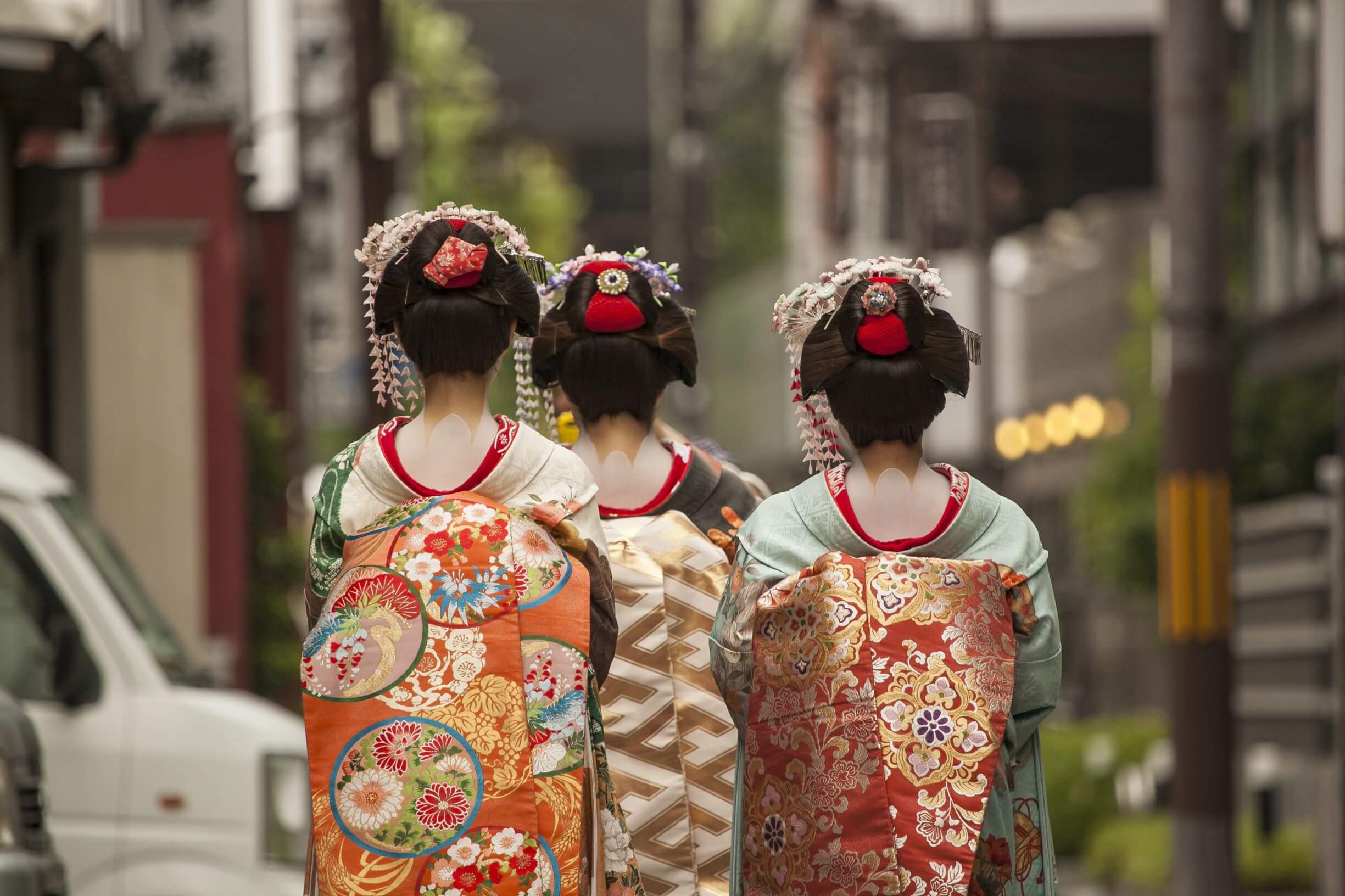 Obi is a sash that is part of a kimono ensemble. It was used to enclose kimono, but today it is more for decorational purposes. Women’s obi is usually about 12 inches wide and longer than 13ft and men’s obi are narrower and shorter than women’s obi. Children wear obi that are soft so that it gives them more room to move around, while women’s are generally quite stiff.

There are two types of obi for men: Heko obi (informal occasions) and Kaku obi (formal occasions). And there are more than 15 types of women’s obi and about 10 ways of tying them. Some obi are used only for certain types of kimono. Just like kimono, the type of obi, fabric, color, and shape of the knot can be adjusted according to the formality of the event. 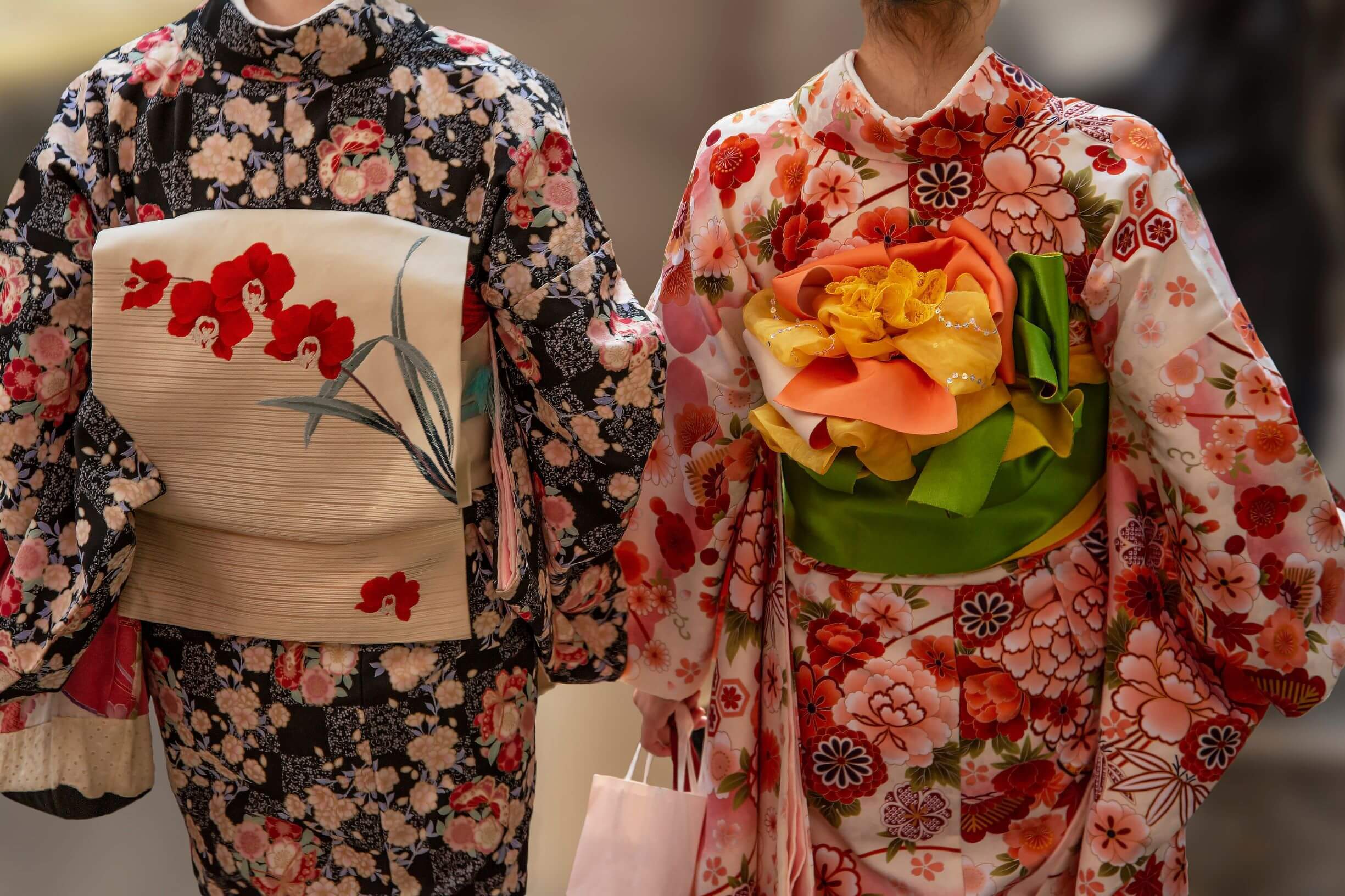 To give you some examples of women’s obi, there are:

Fukuro obi is the most formal type of obi that is commonly used by most people. It is one grade lower than darai obi which is a type of maur obi worn by maiko, apprentice of geisha. It is a little bit shorter and lighter than darai obi, but it has to be tied using Nijudaiko musubi (knot) which is folding the obi into a half length because it is still long. Fukuro obi is usually worn at a ceremony and celebration.

Hanhaba obi is a sub-category of hoso obi which is an informal type of obi that is half-width of formal obi. It is used the most commonly as it is easy to handle and does not require extra accessories such as pads and strings. This can be worn with yukata and other daily kimono. People often twist the two-sided hanhaba obi to show off both sides of the reversible obi. There is also the asagao musubi method that creates Japanese morning glory shape in the back and chocho musubi which is ready-made obi with butterfly knot in the back. 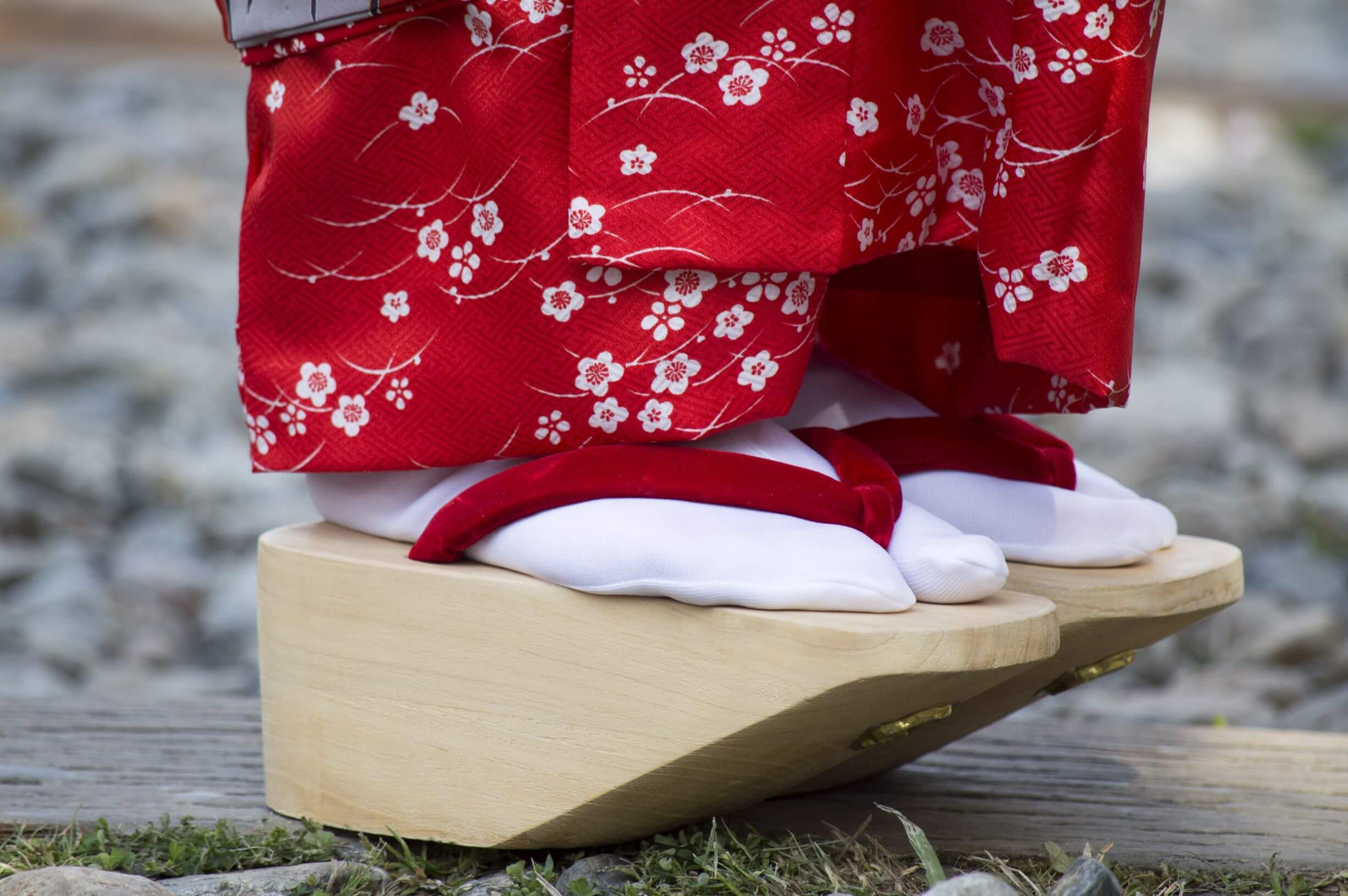 Japanese traditional shoes have the most distinguishing feature of looking like a flip flop. They always separate big toes from the rest of other toes, and so do their socks, tabi.

Zori: The most common type of shoes worn with kimono. Mostly flat, but varies in height

Pokkuri: Have a high base made with wood. Sometimes the inside of the base is empty and has a small bell inside to make noise every time a person walks. They are usually used by maiko or with furisode.

Okobo: Also has a high wood base. Common for people training for geisha.

Ippon geta: Mostly worn at a performance. It has one thin tooth-like base, so people have to practice walking to adapt.

Hiyori geta: Has two teeth in the base. Invented to avoid puddles and rain. 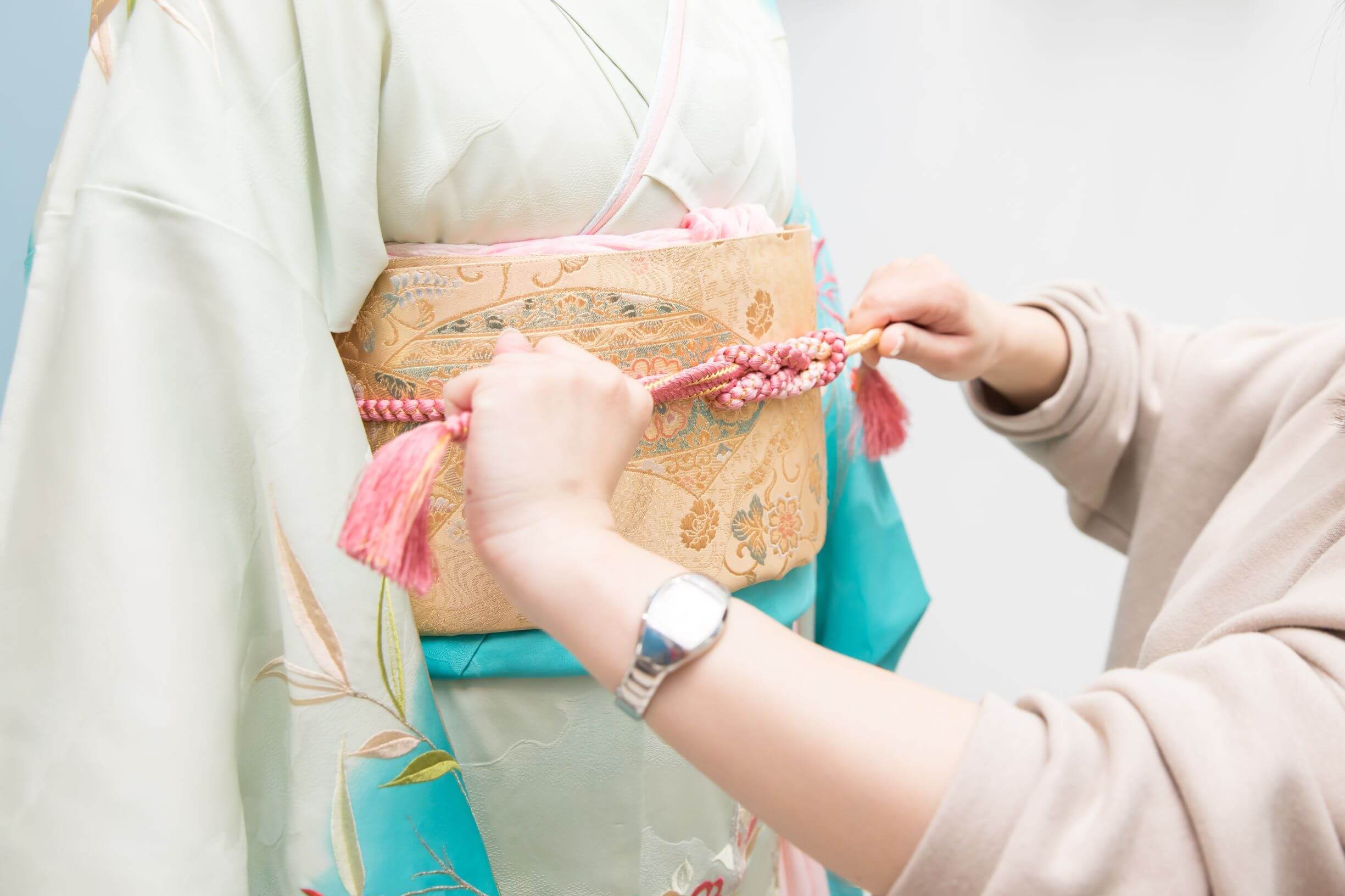 How to Wear Kimono

There are different ways of wearing kimono according to a type of kimono, especially for those for stage, performance and wedding. But following are some basic guidelines for how people commonly wear everyday kimono.

1. Put your arms into the sleeves. Hold the collar on each side with hands and lift the collar up so that the clothes stay a little bit above your feet (around your ankle).

2. Wrap your body with the right side of the collar first, then the left side (wrap the left side over the right side). Tie the robe with a string, so that it stays. You may need to fold the fabric over the tie to adjust it to the proper length, especially if you're on the shorter side.

3. Tie your kimono's obi with your choice of knot method. It's helpful to tie the knot facing front and then shift it to the back when you're done. The first few times you may need a friend to help you manage the length and get it just right