Can you imagine having grilled fish and rice first thing in the morning? This sounds like a full meal and more like what you would expect for lunch, but, in Japan, this is how many people start their day!

With most meals centered around rice, it’s no surprise that rice is at the heart of a traditional Japanese breakfast. The rice is accompanied by several other small dishes, with each served in its own separate bowl or plate. Let’s take a look a closer look at what’s on the morning menu in most Japanese homes! In today’s fast-paced lifestyle, abouthalf of Japanese people still prefer rice to start their day. If you’ve got to beat the morning rush hour though, tamago kake gohan is quick yet hearty meal to fill you up! 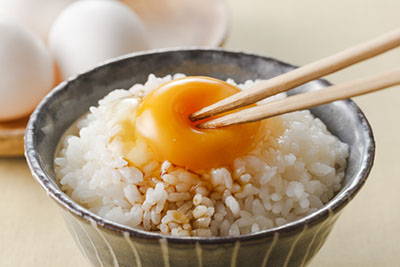 Tamago kake gohan (卵かけご飯), literally “eggs on rice,” is a bowl of rice with a raw egg cracked over it. While the rice is still steaming hot, you break the egg and mix it in. This creates an eggy sauce that seeps into the hot rice. Soy sauce orfurikake (a seasoning mix of dried seaweed, sesame seeds, bonito flakes, and other dried ingredients) can also be added for flavor. 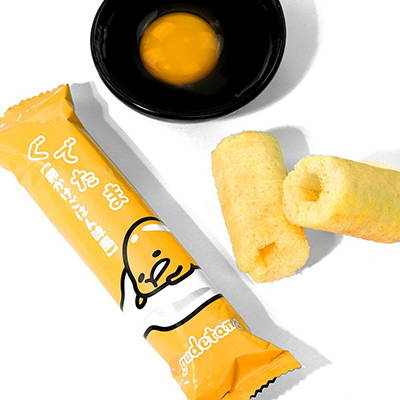 This easy dish is perfect for Gudetama, the Sanrio egg character famous for his laziness! TheGudetama Tamago Kake Gohan puff snack tastes just like a bowl of hot rice with egg, flavored with the nuanced savory-sweetness of soy sauce and furikake.

Onigiri, or rice balls, are also commonly eaten at breakfast. They can have fillings, such as fish or pickled plum, but can also be enjoyed as is with a seaweed wrap. Enjoy the simplicity of a warm bowl of white rice by crunching intoOnigiri Senbei Ginshari, a simple yet satisfying rice cracker. 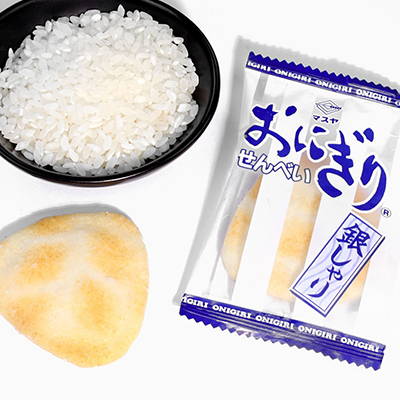 A traditional Japanese breakfast may also include a piece of salted grilled fish such as salmon,natto (fermented soybean), pickled vegetables, and miso soup. Pickled vegetables help balance out the meal with their fresh, yet light sour flavor. We found a wonderful friedKakinotane(a popular crescent-shaped senbei snack) inspired by pickled cucumbersfeaturing a tart, shiso pickle flavor. Miso soup wraps up a Japanese breakfast with warmth and umami, which comes from its dashi-based broth, and which you canfully experience with Dashi Agesen Rice Crackers. 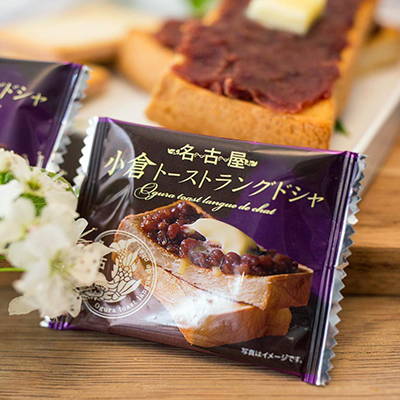 Japanese breakfast has evolved through the years, incorporating Western traditions of bread. In the city of Nagoya, a business hub centrally located between Tokyo and Kyoto, a unique type of toast is eaten for breakfast.Ogura Toast is a Nagoya specialty sandwich, made with buttered toast and red bean paste. The Nagoya breakfast staple inspiredOgura toast langue de chat sandwich cookies, where the two biscuits represent the toast. The white-chocolate filling infused with red bean replicates the unique texture and flavor of the butter and red bean. 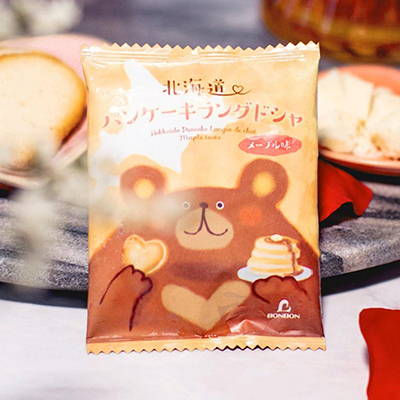 When someone says pancakes, you probably think of slow Sunday mornings, but, in Japan, did you know pancakes are normally eaten as a dessert? In Japan, pancakes are more commonly known ashotcake (ホットケーキ), and you can find many cute restaurants that serve them with ice cream or chocolate sauces.

Try Something a Little Different

Breakfast is considered the most important meal of the day, and it’s fun to see how it differs across cultures! We hope you enjoyed our little guide to what breakfast is like in Japan. Start your day off right with a good breakfast, and keep the munchies away withthe best Japanese snacks in between.

GET NEW SNACKS EVERY MONTH