Mochi is having an international moment, with retailers carrying mochi ice cream, and small shops popping up selling this Japanese treat worldwide. But what is this Japanese dessert? The basic definition of "mochi" is a sticky rice cake made with glutinous rice called mochigome. But often, the lines get blurred, and that's why we're here to help!

When I say blurred, sometimes you can find sticky rice cakes that are called mochi but aren't actually made from grains of mochigome. Other times Japanese snacks may be made with mochigome, but aren't always called mochi. It can be quite confusing for the casual traveler. Part of the reason for this confusion is that mochi can also indicate texture in Japanese. Mochimochi means "chewy," "springy," or "elastic." 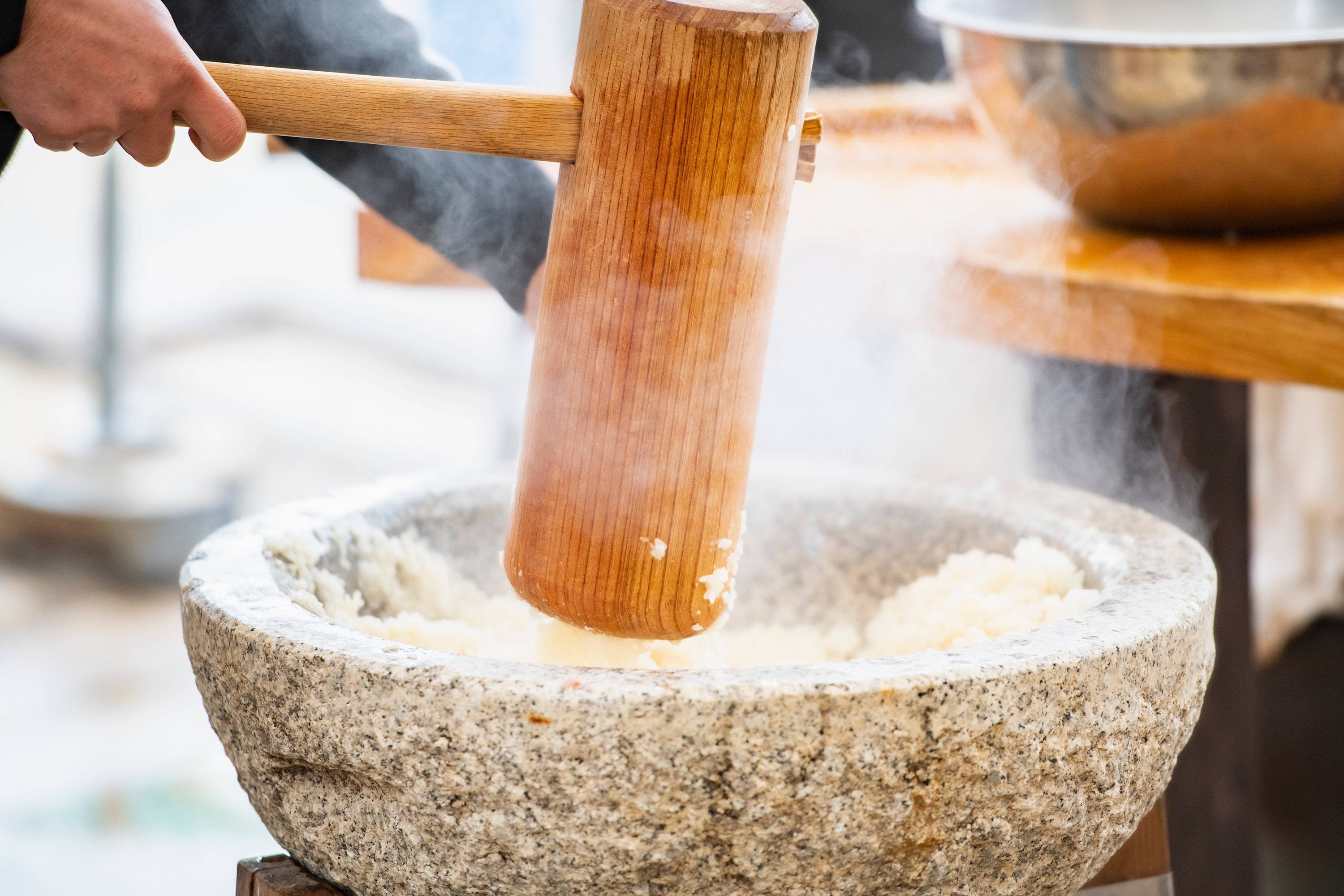 Traditional mochi is made by pounding steamed rice grains using an usu and kine (mortar and pestle). It takes two people to make mochi this way, so it's usually only done for celebratory occasions. The most common types of Japanese mochi made in this traditional way are usually served around the New Year.

Nowadays, not all types of mochi are made by hand. Much of it is made by machines or at home. While traditionally mochi is made from grains of rice, modern methods often use mochiko rice flour instead. In the past, mochi made with sweet rice flour and not whole grains would have been considered dango (more on this later), but now that's not always the case. One thing to note for any gluten-free folk is that despite all this talk of "glutinous" rice, there isn't any gluten in mochi rice. The gluey texture comes from the starches present in the rice grains. So rest assured, mochi made with 100% mochi rice or rice flour is gluten-free.

There are a couple of variations of mochi, including Daifuku, Dango, and butter mochi. Daifuku is a thicker mochi that often contains an especially sweet filling, like a strawberry or even pudding! Dango, on the other hand, is a Japanese dumpling made from rice flour mixed with glutinous rice flour and uruchi rice that is prepared with a different mochi-making method; instead of being consumed as finger food, three to five round-shaped dango are served on a skewer. Meanwhile, butter mochi is a Hawaiian dish that has been described as a cross between cake and mochi. Unlike the other mochi flavors, butter mochi is usually cut into square pieces, but it is made with the same rice flour as regular mochi.

Below we are going to dive into some popular types of mochi and explore what makes them different.

Mochi has a lot of symbolism in Japanese tradition. It's sticky and is a homophone for the Japanese word "to hold," contributing to the belief that mochi in the new year is good for holding on to good luck. Around the new year, numerous mochitsuki taikai or "mochi-making competitions" are held throughout Japan, where two-person teams make mochi the traditional way. The fresh mochi is then divided and eaten by the crowds. Every year in Japan, reports of people choking on mochi come out. It's so sticky that mochi poses a serious hazard to the elderly and children. If you find yourself choking on fresh mochi, the best way to clear the airway is by using the sucking power of a vacuum. No, we're not kidding.

Fresh mochi covered in kinako (roasted soybean powder) and sugar is also a new year's specialty. The kinako powder adds a nutty flavor to what can otherwise be a fairly flavorless snack. 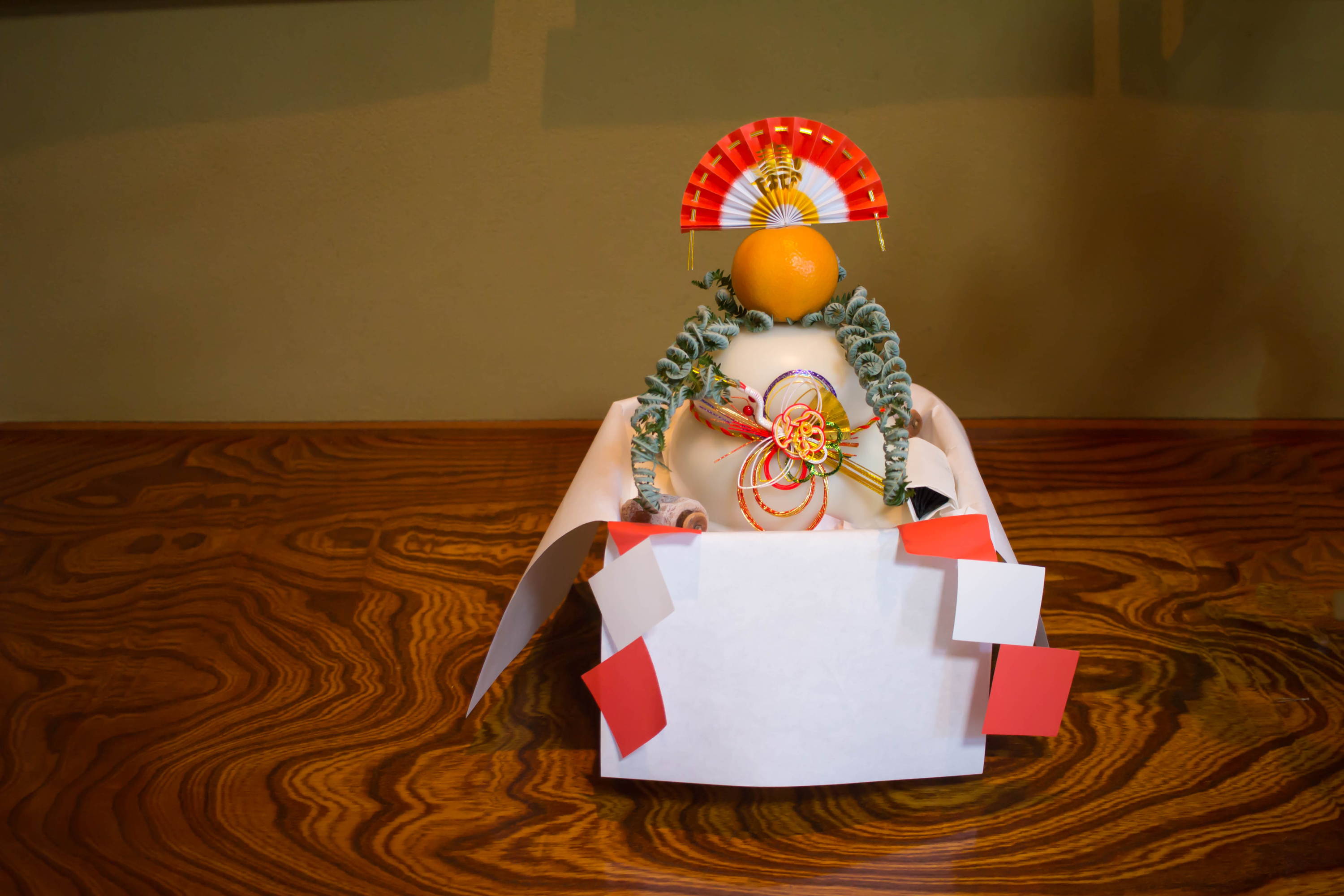 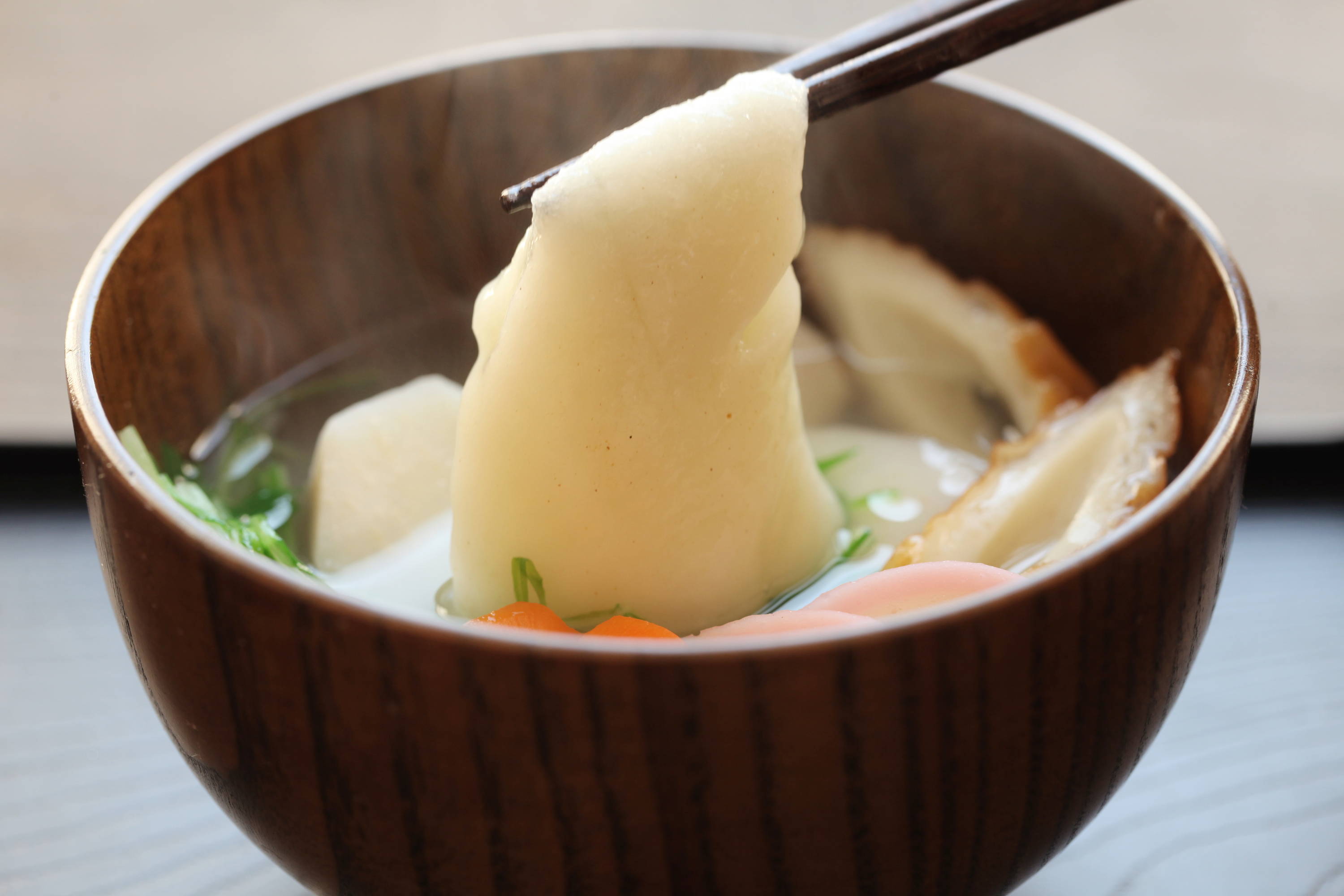 Kagami Mochi is made especially for the new year and is highly symbolic. This type of mochi is displayed and eaten on Kagami Biraki, a special holiday for the occasion. It's often unflavored, and most people soften it again before trying to eat it, as it becomes dry while on display.

Ozoni is another way to eat mochi on New Year's Day. Enjoyed in a soup base, it's thought to be a very auspicious new year's dish and is considered osechi ryori. The soup base and whether the mochi are grilled or boiled before being added varies on the region. 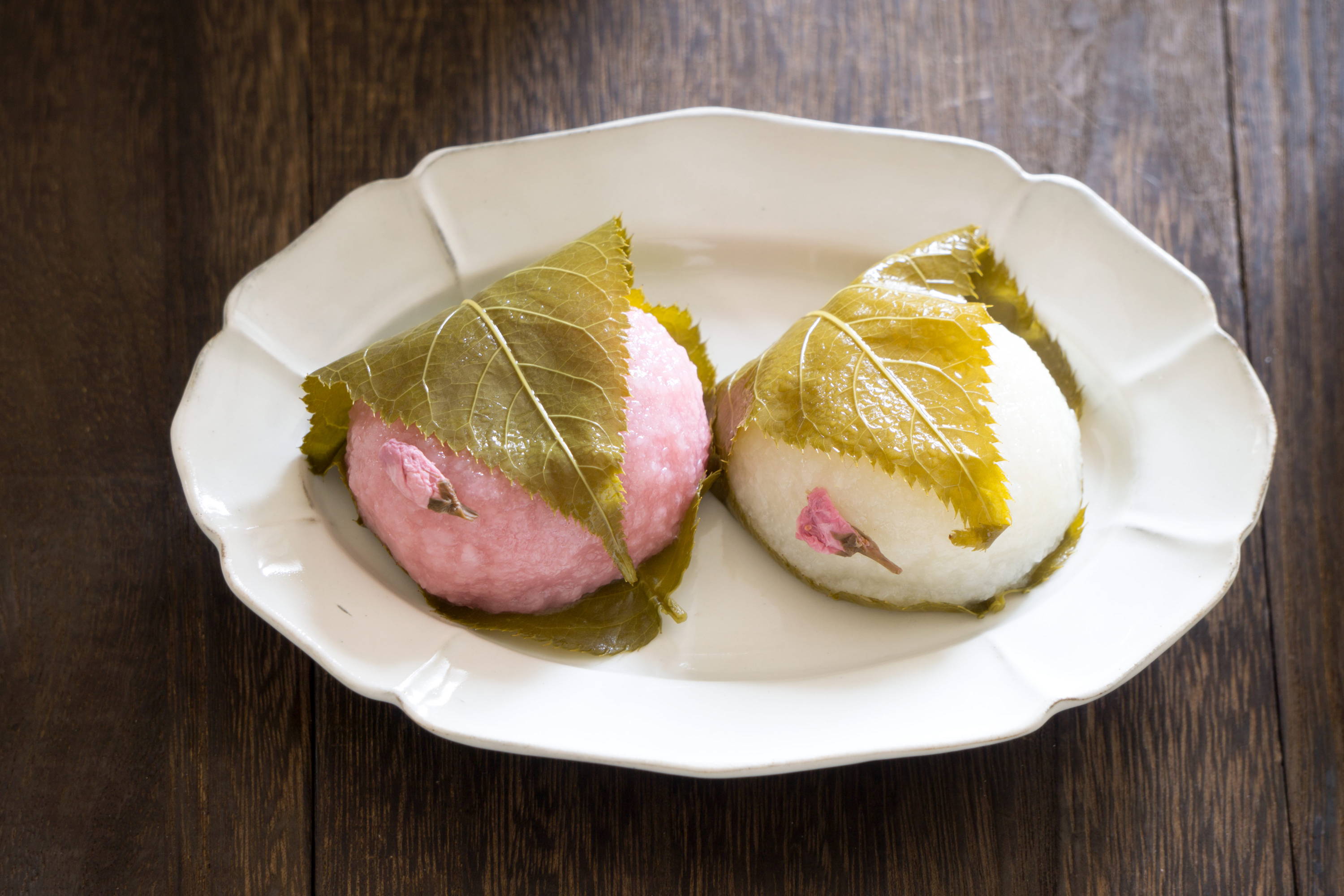 Usually eaten in the spring for hanami (flower-viewing) season, there are two main regional varieties. In the Kanto region (Eastern Japan) shiratamako, a type of sweet glutinous rice flour is formed into a pink pancake and rolled around a red bean paste filling. In the Kansai region, domyojiko or coarsely broken rice grains are dyed pink and completely wrap the red bean filling. Both are finished with a pickled sakura leaf that infuses the rice with its flavor.

Yakimochi is literally "grilled mochi." It is any mochi that has been heated over a grill or baked. This adds a pleasant toasty flavor with crispy spots on the outside, while the inside becomes soft and sticky. Yakimochi is a popular street food snack at festivals, but can also be added to soups and other meals, or eaten as a meal on its own. It can be made using either fresh mochi or dried mochi, and the results are slightly different based on that choice. 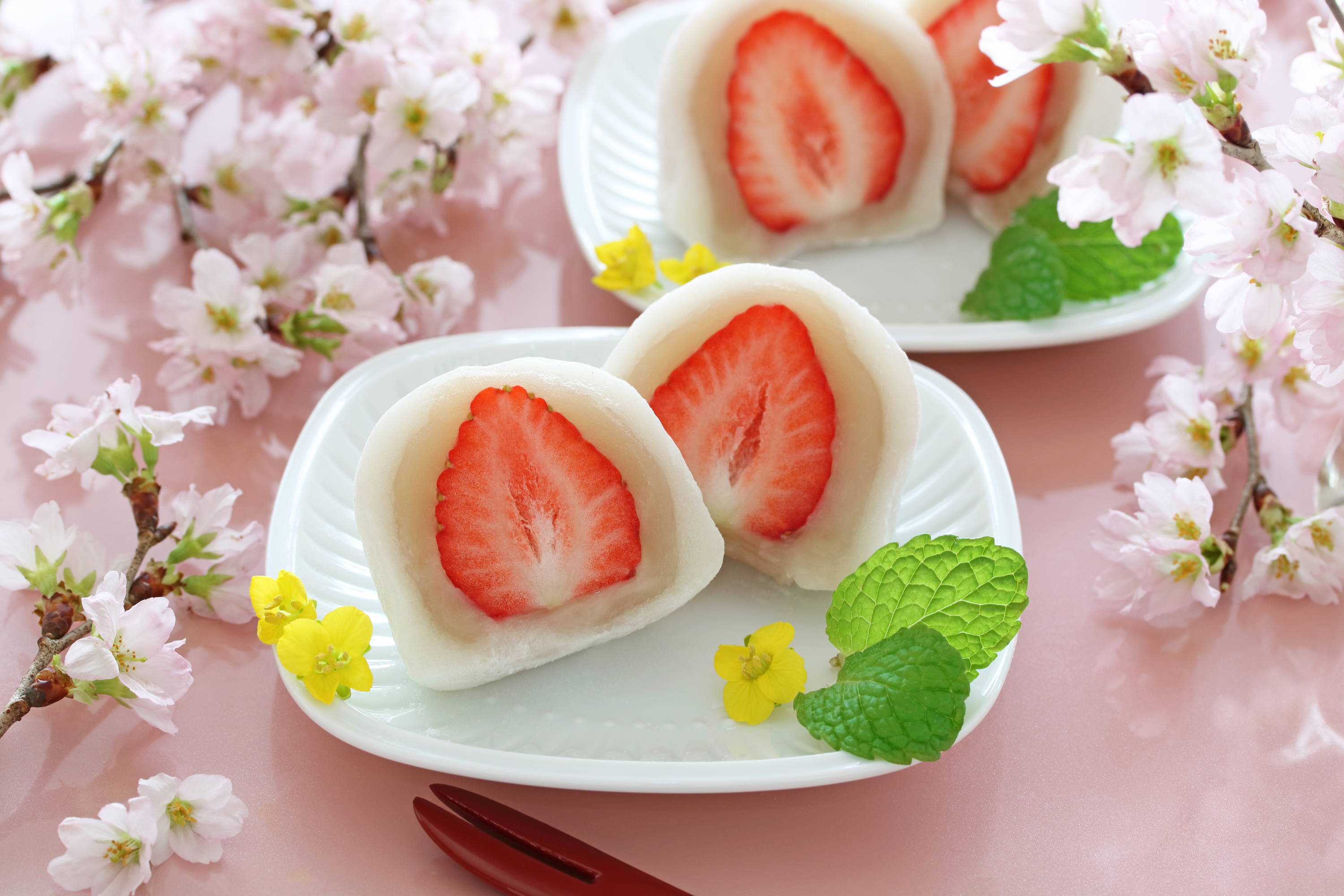 Daifuku can often be characterized by having soft, smooth, sticky mochi dough wrapped around a filling, usually sweet red bean paste (but not always, can you sense a theme?). A popular winter variety is strawberry daifuku, where the filling is a whole strawberry covered by a layer of red bean or white bean paste. Mochi ice cream can also technically be considered a type of daifuku. Bonus fact: the word daifuku literally means "big luck."

Consider this the opposite of daifuku. Instead of being a case for the filling, the mochi is the filling. Red bean paste is the most traditional version, with a thick paste coating the entire mochi. 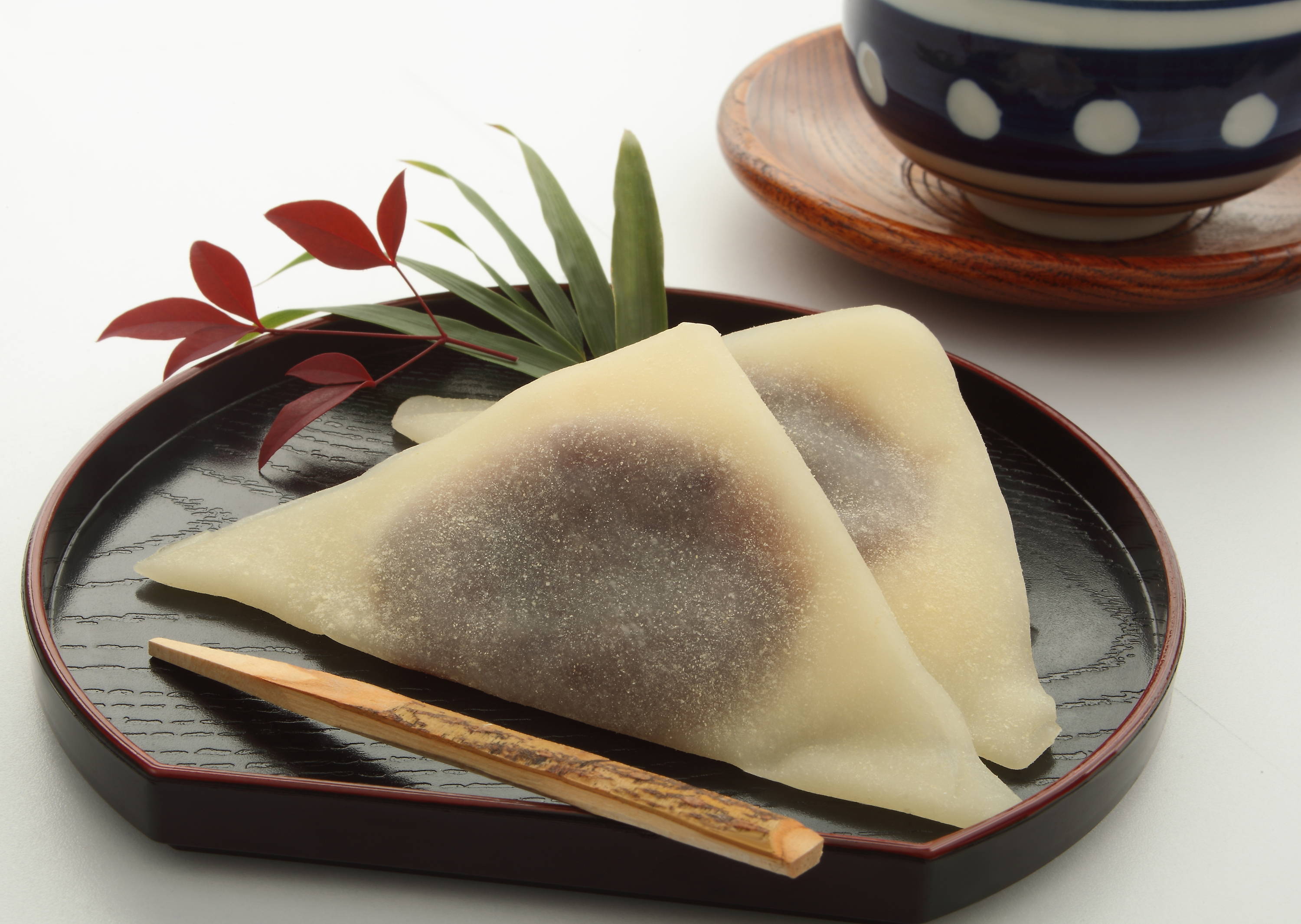 This type of mochi is a Kyoto specialty. It can come as nama (fresh) or baked. Fresh yatsuhashi is typically shaped into triangles and flavored with cinnamon or matcha, and features a small red bean filling. Baked yatsuhashi is almost always cinnamon-flavored and is formed into thin sheets.

This unique mochi is tri-colored and cut into the shape of a diamond. It is usually served at Hina Matsuri (Girl's day) celebrations. Since the festival is in the early spring, the green, white, and pink layers bring to mind the cherry trees. Like kagami mochi, its function is more ornamental and is meant to symbolize fertility. 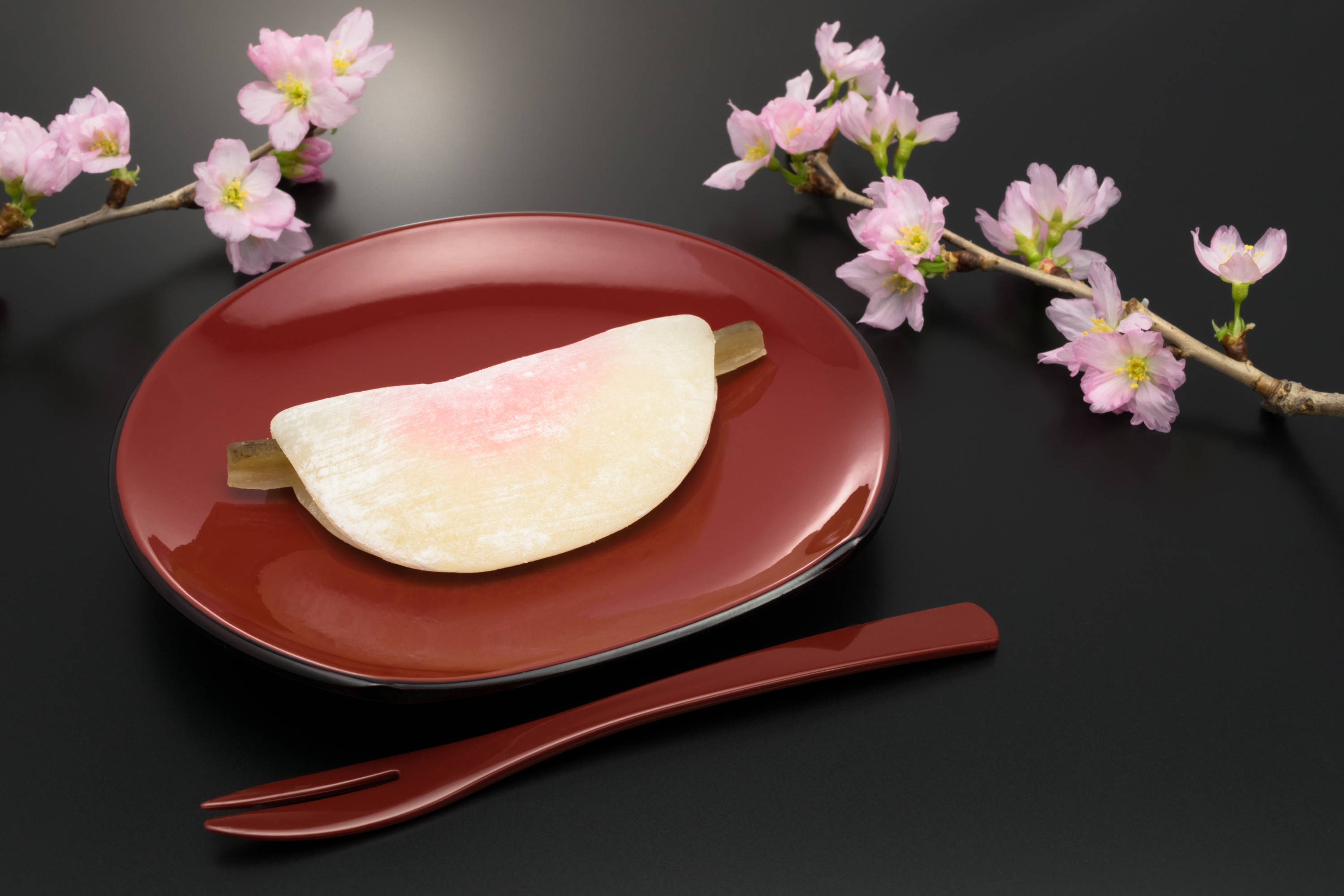 Hanabira mochi is named for its beautiful look. It is specifically crafted to look like a flower petal. A common form of hanabira mochi is a thin layer of white mochi is wrapped around a red bean or burdock root filling. The transparency of the mochi allows the color of the filling to peek through, creating a delicate appearance.

Unlike the other varieties listed thus far, this is a savory mochi! It is usually made with individual pieces of fresh mochi. Each is wrapped with a small seaweed sheet and dipped in soy sauce.

If you have leftover mochi that has gone a bit dry, don't throw it out! This is a great time to try making kakimochi, a type of mochi that is thin cut and fried. It's like turning a rice cake into a rice cracker. Flatten the mochi while it's still soft if you can, let the mochi continue to dry, and then break it into small pieces to deep fry. They're done when they've puffed up and turned golden brown. 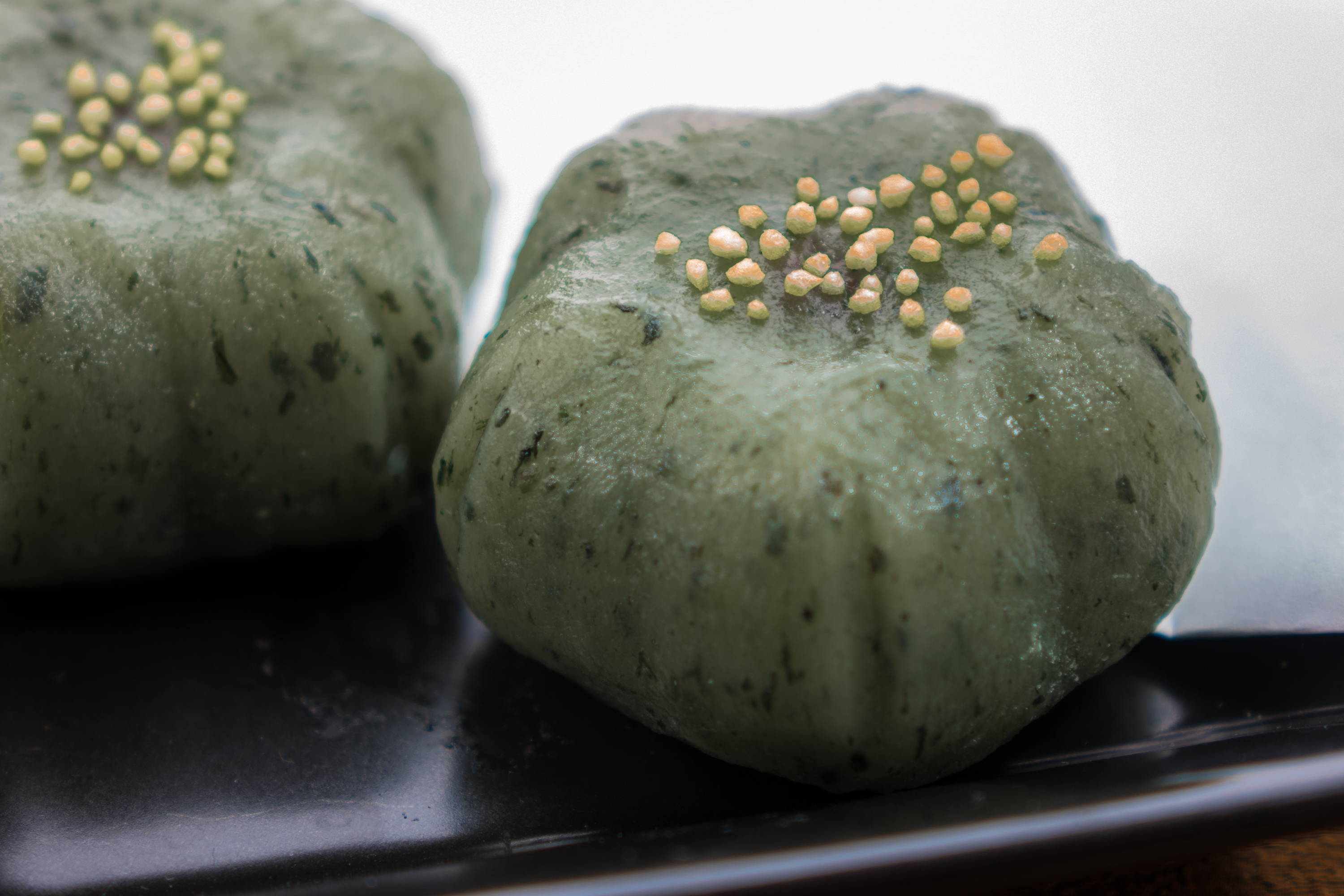 Kusa mochi literally means "grass mochi" because of its bright green color. It is made with Japanese mugwort, which is kneaded into the mochi. This mochi is also called yomogi mochi after the Japanese word for mugwort. Kusa mochi also began as an offering for Hinamatsuri, partly because yomogi is known for medicinal properties like increased vitality. Sometimes it includes a red bean filling.

Kiri mochi is a type of mochi that has been purposefully dried to preserve it. Usually, it's shaped into flat blocks. Kiri mochi is generally enjoyed after being grilled to soften it once more and added to soups or other dishes.

When I say " fake," I mean these are some traditional Japanese treats that are often mistaken for mochi but are not made from grains of mochigome. They're still absolutely delicious, they're just not exactly the same as "mochi." 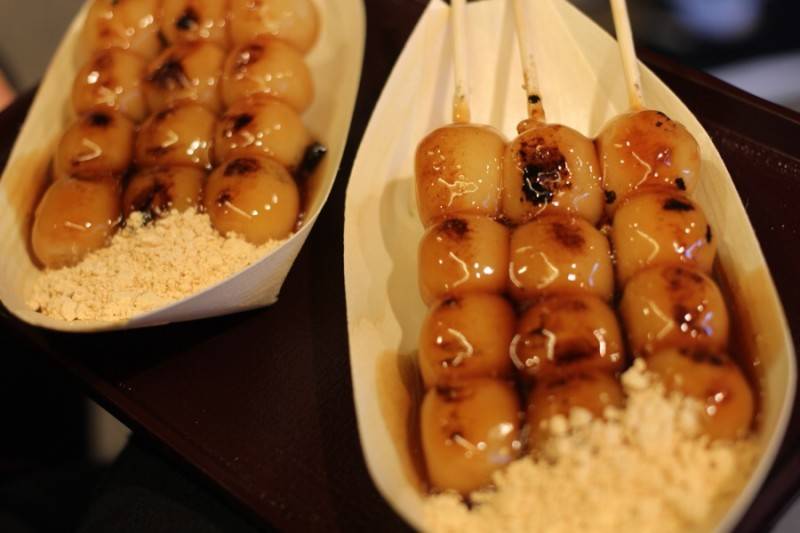 The main difference between mochi and dango is this: mochi is made from steamed rice grains, while dango is made from sweet rice flour. That said, as I mentioned earlier, many modern mochi are made using rice flour. This results in a different texture, and you could make the argument that what they're making is actually dango. But at the end of the day, it's all delicious, so who cares.

Two popular types of Dango you're likely to see in Japan are mitarashi dango and hanami dango.

This traditional Japanese sweet originated in Kyoto. Its name "mitarashi" comes from the word for the purifying fountains placed outside Shinto shrines. It's made by grilling 3-5 dango on a skewer and coating it in a thick, sweet soy sauce glaze. Nowadays, mitarashi mochi can be found throughout Japan, from street stalls to convenience stores.

These cute rice cakes are especially popular in the early spring for the sakura flower-viewing season, though they are available all year round. They're so iconic that there's even an emoji for them [🍡]. They are almost always served as 3 dumplings on a stick. Pink represents the cherry blossom flowers, white is for the remaining winter snow, and green for the coming spring grass. 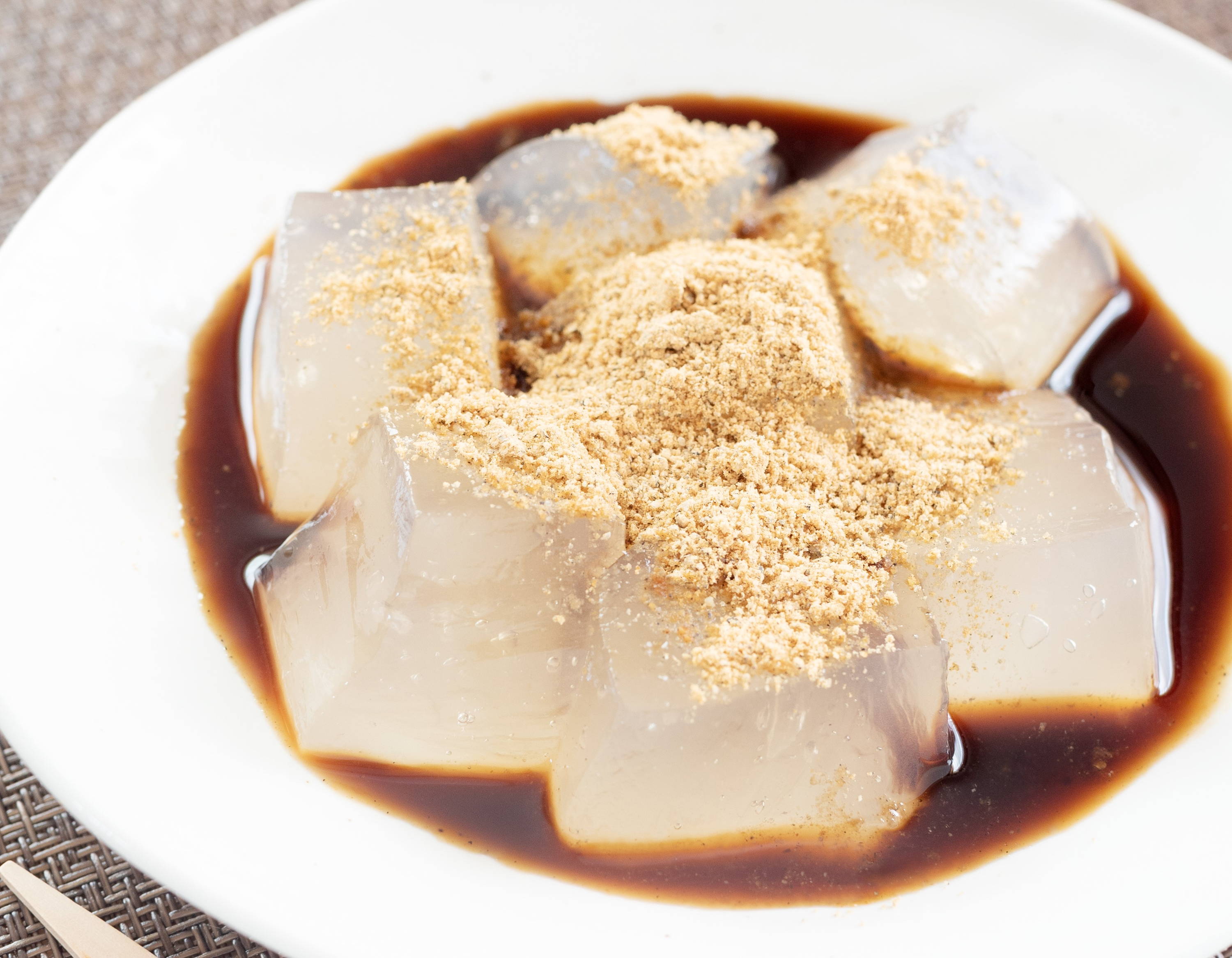 Confusingly, warabi mochi contains no mochi rice whatsoever. It gets its name from its texture. It is made with the warabi plant, a type of starchy bracken. It gives the sweet a transparent and jelly-like texture. The viral raindrop cake is actually very similar to warabi mochi. It's usually dressed up with a dash of kinako powder and some kuromitsu syrup. It's especially refreshing served chilled in the summer months.

Like warabi mochi, there is no mochigome to speak of in this Japanese treat. Kuzumochi is made with flour from the root of the kudzu plant. It makes for a jelly-like dessert with a cloudy, white appearance. It is also usually served with kinako and or kuromitsu syrup.

Well, congrats, you made it to the end! This guide to the various types of mochi you can find in Japan is really a jumping-off point for your own discoveries. For each type of mochi listed here, there are countless variations. And we didn't even get into regional specialties! Mochi is one of the most versatile foods when you consider the different flavors and shapes mochi can be transformed into. And at its heart, mochi is just two ingredients: glutinous rice and water.

If you're feeling inspired to try some of the sweets you've discovered here, check out our Mochi collection on Bokksu Boutique.

This Kirby mochi is so kawaii!