Japan’s cuisine wouldn’t be what it is without the country’s staple fruits, vegetables, spices, etc. We’ve put together a list of 15 Japanese ingredients commonly used in Japanese snacks, desserts, and other foods. With these on hand, you’re on your way to having a well-stocked Japanese pantry for all your Japanese baking and cooking desires. 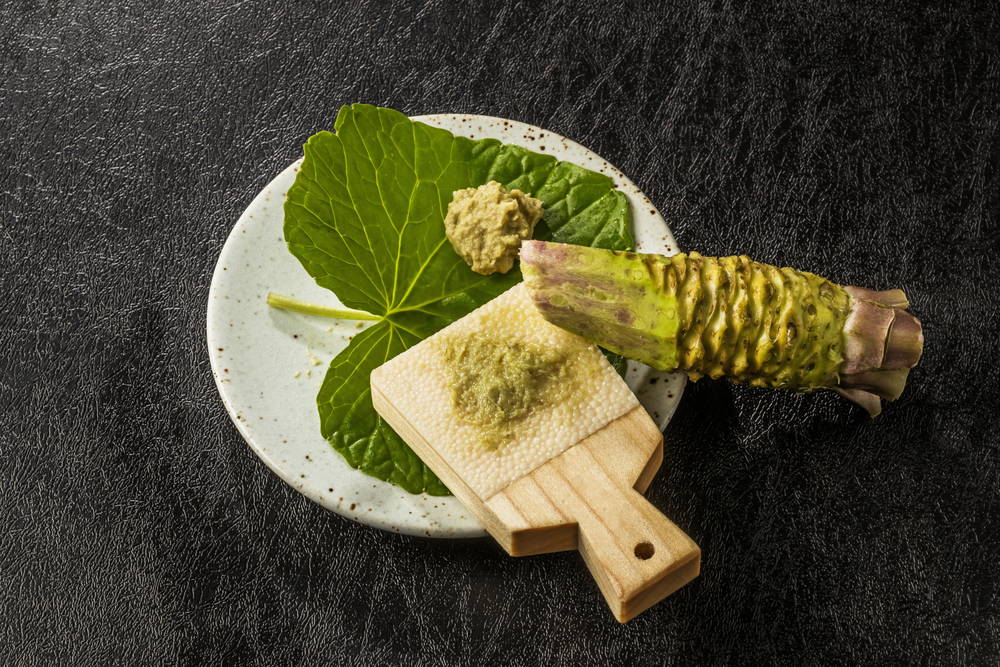 This condiment will add a kick to any dish—and a little goes a long way! Known for its sharp and spicy taste, wasabi is in the same family as horseradish and mustard. Its root is ground to make a powder or paste that’s typically served with sushi and sashimi. Real wasabi is actually quite rare and expensive. So outside of Japan, any “wasabi” served alongside your sushi might just be dyed horseradish-mustard mix.

Matcha is finely ground green tea powder made from shade-grown green tea leaves. It is extremely popular in Japan and around the globe thanks to its unique, earthy flavor and bright, iconic color. Matcha can be consumed as a tea or added to other foods, for color and/or flavor, in both sweet and savory applications. It appears in treats like ice cream and candy as well as foods like soba noodles. 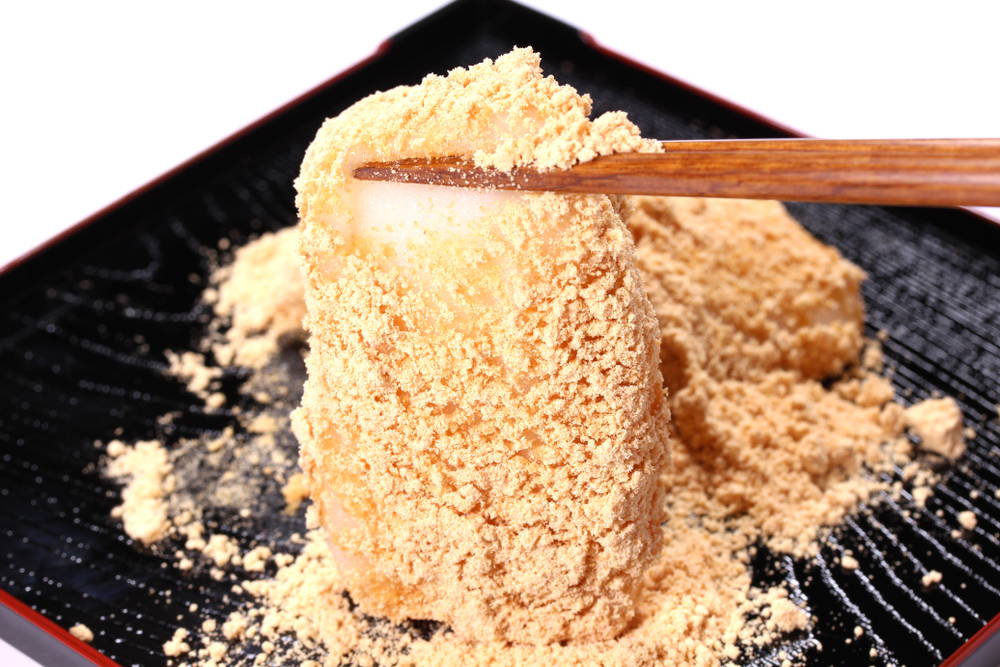 One of the most popular varieties of Japanese rice, mochigome is a glutinous, sticky rice used to make mochi, or Japanese rice cakes, among other dishes. The grains of this rice are short, round, and opaque—making it fairly easy to recognize compared to other rices.

Kinako is roasted soybean flour and literally means “yellow flour” in Japanese. It is often a pale golden to yellow color, though may sometimes be a light green depending on which type of soybeans were used. Dumplings or mochi are coated in kinako to add a toasty, nutty flavor for a traditional Japanese snack. Like matcha, kinako can also go into baked goods like cakes and cookies for unique Japanese flavoring from within. We wrote a whole blog post devoted to kinako because we love it so much.

Also sometimes spelled “adzuki”, azuki are reddish-brown beans grown in the Himalayas and East Asian. These beans are a healthy, plant-based protein that offer a rich, nutty flavor with natural sweetness, earning them the moniker “sweet red beans”. Azuki beans are often boiled before being ground or mashed. Mixed together with a bit of sugar, honey, or other sweetener, the beans make anko, a sweet red bean paste or jam used as a filing for various Japanese desserts like dorayaki. 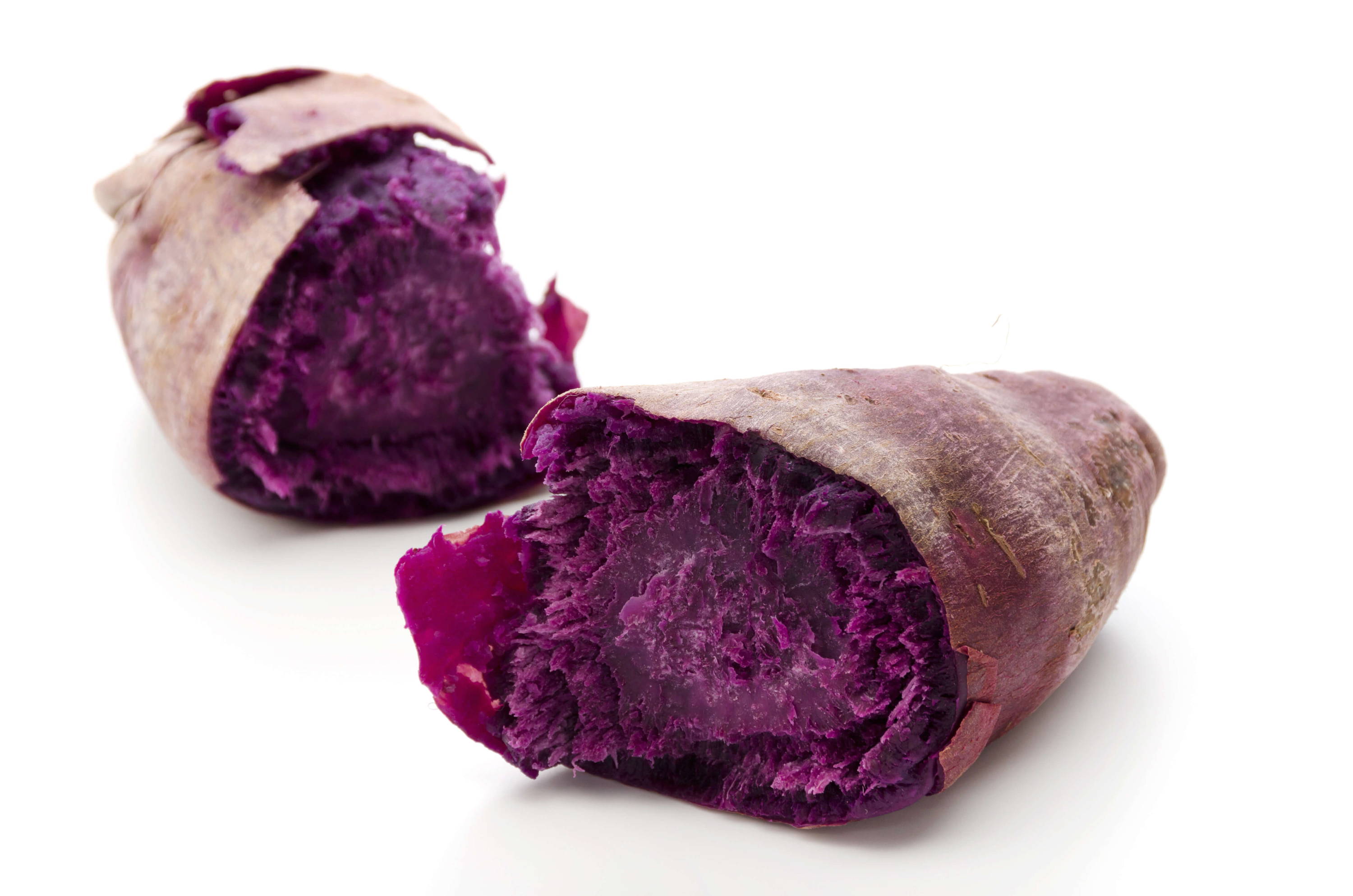 Who doesn’t love potatoes? A truly versatile ingredient, potatoes and can be made smooth, crispy, sweet, or savory. Beniimo is a kind of sweet potato from Okinawa Prefecture that’s renowned for its beautiful purple color and delectable, sweet flavor. It can be made into ice cream, cheesecake, and other desserts. What’s more, it’s also a superfood filled with fiber and vitamins A and C!

Referred to as a black or brown sugar, kokuto from Okinawa is not your conventional sugar. A healthier kind of sweetener, kokuto is unrefined, pure cane sugar that’s full of calcium, potassium, and iron. Boasting a unique, mellow sweetness, kokuto is a flavor builder used in soups, stews, stocks, and sauces on the savory side, and features a star ingredient in many Japanese sweets! 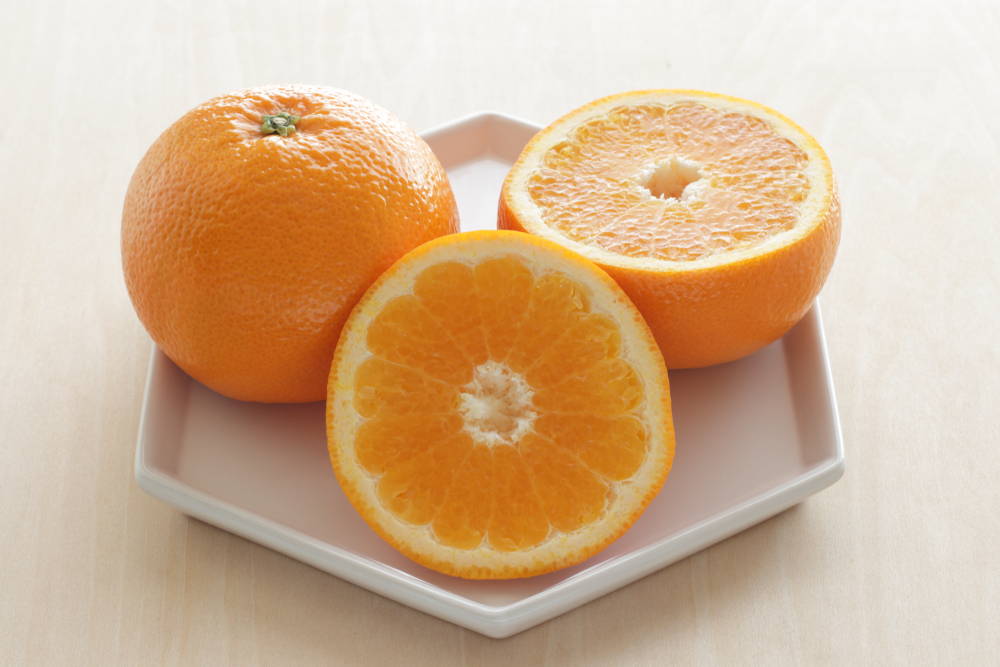 One of the most widely produced citrus fruits in all of Japan, iyokan is grown in the Ehime Prefecture, which was once called “Iyo-no-kuni,” meaning Iyo Country, which is where this citrus gets its name. Sweeter than a grapefruit, but more bitter than an orange, iyokan is a pretty orange fruit that looks similar to a mandarin orange. When grown in a five-sided, pentagon-like shape, iyokan are presented to wish someone good luck.

An iconic symbol of spring, sakura are Japanese cherry blossoms. They can be made into tea and added to foods for a mild floral taste and aroma. Both sakura petals and leaves can be used in sweet and savory dishes. Though sakura are edible, they shouldn’t be consumed in large quantities. 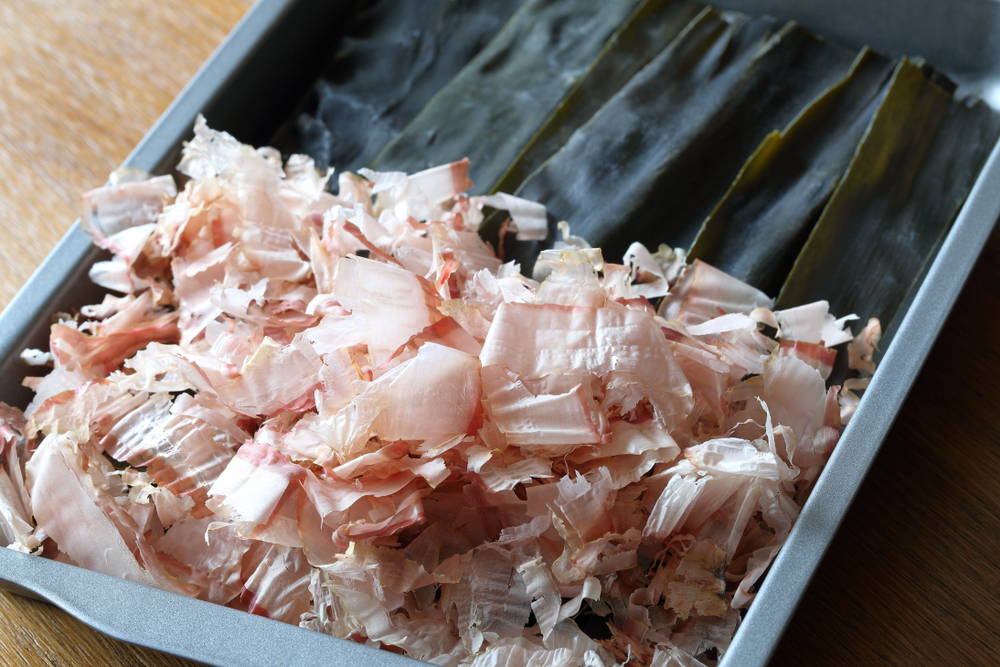 Kombu is a type of kelp or seaweed that’s popular in many Asian countries. Known for the distinct umami flavor it adds to dished, kombu can be dried, pickled, or eaten fresh. Arguably its most popular application, kombu is used to make dashi, an iconic Japanese soup stock.

Katsuobushi, also known as bonito flakes, is dried, fermented, and smoked skipjack tuna. It can be used as a seasoning and/or topping on things like rice, noodles, and tofu. It’s also used as a stuffing for rice balls and to make dashi. 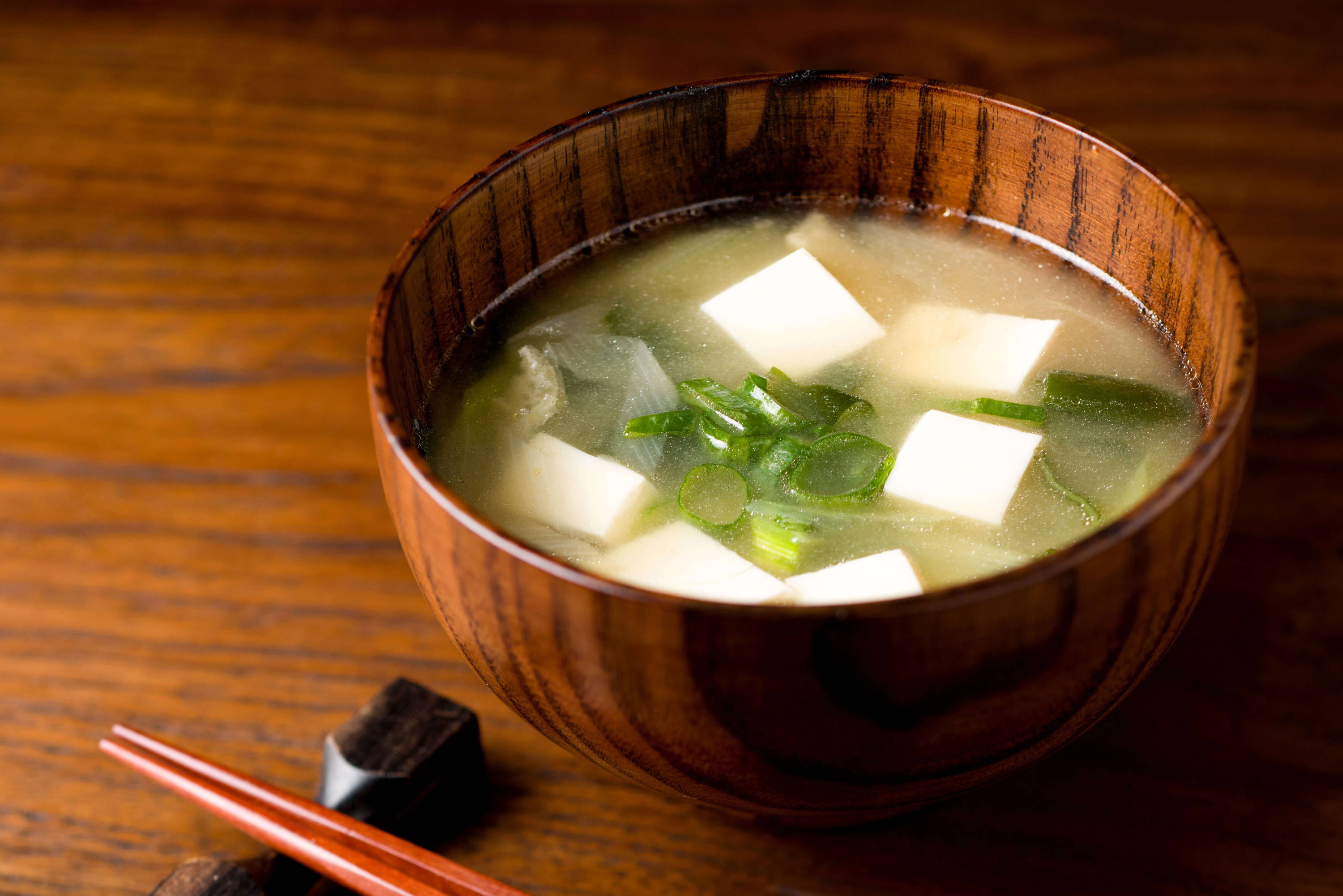 Dating back to the 8th century, miso is a traditional Japanese seasoning made from fermented soybeans. The flavor of miso can be umami, salty, and/or funky (from the fermentation). Lighter miso is a tad sweeter compared to red/dark miso. A well-known dish is miso soup or misoshiru in Japanese.

Similar to sake, but with less alcohol and more sugar, mirin is a tangy, slightly sweet type of rice wine. Mirin pairs well with soy sauce and is a vital ingredient to making teriyaki sauce as well as broths, glazes, marinades, etc. Different types of mirin can have anywhere from 14% to less than 1% alcohol. 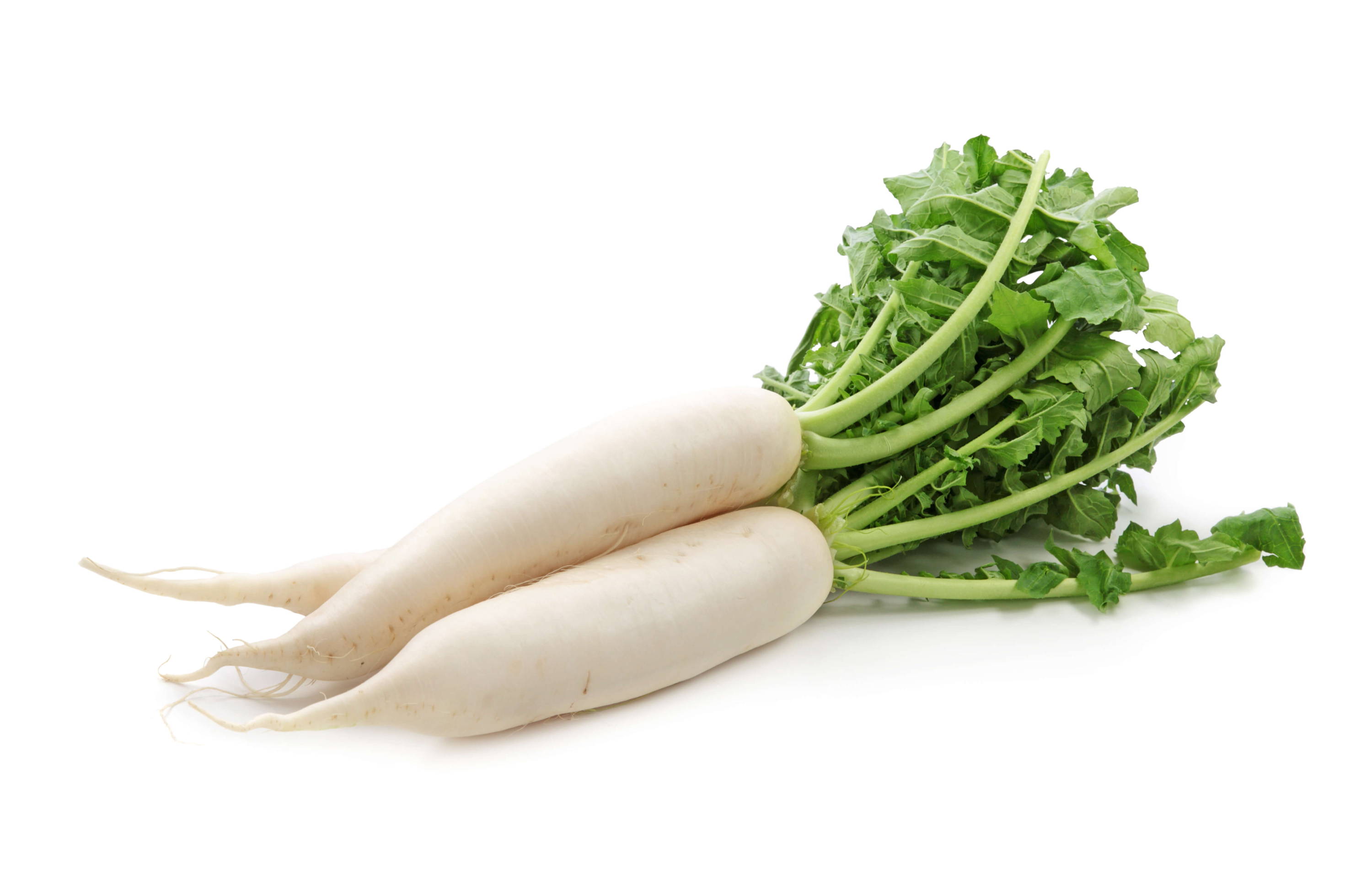 Daikon means “big root,” and it’s a type of winter radish that can be eaten raw or cooked until tender. On its own, daikon radish is mild, with a slightly sweet and spicy flavor. Daikon can be pickled or added to dishes as a central ingredient or a garnish.

Komezu is a vinegar made from fermented rice. It appears in pickling liquid, soups, stews, marinades and is also used in sushi rice to add a pop of flavor. Though it is milder than most other vinegars, komezu isn’t really an ingredient you want to eat on its own.

While this isn’t a complete list of everything you could want within reach for all Japanese cooking, we think it’s a pretty good start for many simple Japanese recipes. What will you cook next?